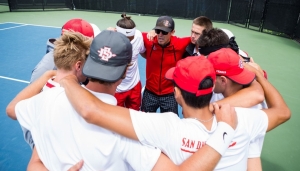 September 22, 2019 (Tucson) - The San Diego State men’s tennis team wrapped up its second event of the fall at the Wildcat Invitational, competing in three singles matches on Sunday at Ventana Golf and Racquet Club.

In bracket play, Daniel Traxler squared off against New Mexico’s Jake Trondson in the consolation finals of the Australian Open flight and took the early lead with a 6-1 conquest in the first. However, the Aztec freshman was unable to close out his Lobo adversary, as Trondson rallied to capture the second set by a 6-4 count before prevailing in a super-tiebreaker, 10-2.

In extra matches, fellow classmate Jules Auffray posted SDSU’s lone victory of the day with an impressive 6-2, 6-1 victory over Northern Arizona’s Chris Steele. However, senior Fabian Roensdorf was not as fortunate in his encounter with Jared Horwood of host Arizona, dropping a tight 7-5, 6-4.

San Diego State will return to the courts in two weeks when it plays host to the Aztec Fall Invitational Oct. 4-6 at Aztec Tennis Center. Select SDSU players will also compete at the ITA All-American Championships Oct.5-13 in Tulsa, Oklahoma.