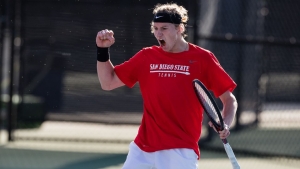 February 27, 2021 (San Diego) - Following a two-week hiatus, the San Diego State men’s tennis team made a big splash on its return to the courts Friday, posting a pair of dual-match victories 4-2 and 5-0 in a doubleheader sweep of visiting UC San Diego at Aztec Tennis Center.

With the triumphant results, SDSU evens its record at 2-2 this spring and moves to 11-0 all-time vs. the Tritons (0-2), who dropped their first two encounters as NCAA Division I members.

The Aztecs were led by Judson Blair, who recorded two wins apiece in doubles and singles, while Johannes Seeman and Roni Rikkonen both collected a pair of victories in singles play.

Blair teamed with Victor Castro in the No. 3 position to clinch the doubles point in both matches for the Scarlet and Black. In the morning clash, the SDSU tandem downed the pairing of William Lan and Cody Duong 6-3 before prevailing by a 6-4 count in the afternoon vs. Lan and Tristan Taylor.

Blair also emerged victorious against Lan at No. 5 singles in the early encounter, toppling his Triton adversary 6-4, 7-6(5) before pinning a 6-2, 7-5 defeat on Eric Silberman at No. 4 in match two.

Earlier, Silberman was the first player off the court in the morning session, falling victim to Rikkonen 6-0, 6-4 in the sixth position. Rikkonen later met little resistance against Fraser Leslie in the same slot, notching the Aztecs’ first win of the second match with a 6-1, 6-2 conquest.

Seeman, meanwhile, started at the top of the ladder in both sessions for SDSU. The Fresno State transfer survived a tough three-set battle against former Aztec Daniel Traxler in the first encounter, 7-5, 1-6, 6-4. Buoyed by his good fortune, Seeman toppled Duong in the afternoon by a 7-5, 6-1 tally. He also joined forces with Aaro Pollanen in the morning match at No. 1 doubles to defeat Traxler and Phillip Lan, 6-1.

We got great leadership from Johannes today,” said Aztec head coach Gene Carswell. “He’s continuing to be a force at the top our doubles and singles lineup.”

SDSU’s other doubles victory was claimed by Rafael Gonzalez Almazan and Ignacio Martinez, who skated past Silberman and Zach Ermert in the second slot during the afternoon.

“It was great for our team to get back into action after the hiatus,” Carswell said.  “There are plenty of things for our group to improve upon, but we’re looking forward to the next challenge here at home.”

San Diego State continues its spring schedule on Sunday, Feb. 28 when it plays host to UC Irvine starting at noon.