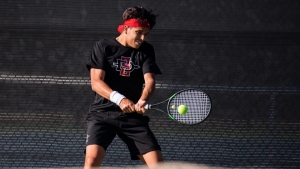 April 16, 2021 (San Diego) - San Diego State gave one of the conference’s hottest teams all it could handle on Friday but was unable to get the desired results, falling to Fresno State by a 4-1 count in a Mountain West match at Aztec Tennis Center.

SDSU found itself behind the proverbial eight-ball after falling short in the first two doubles matches. Johannes Seeman and Victor Castro were upended by Angus Bradshaw and Zdenek Derkas by a 6-3 tally in the No. 1 position, while Judson Blair and Ignacio Martinez were edged by Aleksandr Myagkov and Dario Huber in the second slot 6-4.

With the outcome of the round no longer in question, the No. 3 match pitting Rafael Gonzalez Almazan and Aaro Pollanen against the Fresno State duo of Reese Falck and Henrique Osorio was abandoned, with the Aztec tandem staring down a 5-2 deficit.

Trailing 1-0, SDSU displayed some renewed spirit in singles competition, as Gonzalez Almazan put the host school on the board with a straight-set triumph over Alexey Aleschev in the No. 5 position 6-4, 7-6(1).

Despite some fierce battles with three of the five remaining matches extended to three sets, the Aztecs were ultimately shut out the rest of the way, as the Bulldogs recorded their sixth consecutive victory over the Scarlet and Black.

Myagkov put the visitors ahead to stay after outlasting Pollanen at No. 4 6-4, 7-5, while Seeman experienced a hard-luck defeat against his former teammate Derkas at the top of the ladder. After a narrow 6-4 shaving in the first set, Seeman overcame a 4-0 deficit in the second and eventually reached set point in the tiebreaker could not extend the match, as his Fresno State adversary prevailed in a thriller 7-6(9).

Shortly thereafter, Castro dropped a three-set decision to Huber in the second spot 7-5, 3-6, 6-3, which gave the Bulldogs the necessary fourth point for the team victory.

The two other encounters were suspended in the third set, including Martinez’s clash with Bradshaw at No. 3, which was deadlocked at 1-1. The Aztec senior fell short in another marathon tiebreaker in the first set 7-6(7) before turning the tables in the second 6-3.

In addition, Blair found himself knotted a 3-3 in the third set vs. Osorio in the sixth position. The SDSU freshman jumped out to quick lead after winning the first set, 6-3, before suffering a reversal of fortune in the second by an identical 6-3 count.