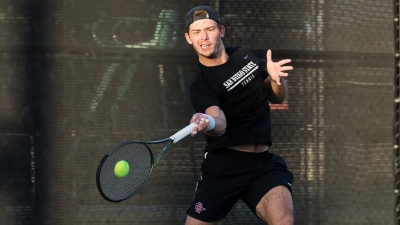 February 5, 2022 (Seattle) - The San Diego State men’s tennis team overcame a 3-1 deficit to claim a dramatic 4-3 triumph over Portland on Saturday in neutral-site dual match at Nordstrom Tennis Center on the University of Washington campus.

The Aztecs (2-0) completed their thrilling comeback with a trio of three-set victories in singles competition, capped by Alexander Mandma, who outlasted the Pilots’ Nikolas Tvedt in a tiebreaker for the clinching point 6-4, 3-6, 7-6(3).

Earlier in the day, SDSU rallied to capture the crucial doubles point as well, with the No. 3 tandem of Jules Auffray and Judson Blair edging Oscar Brown and Nicolas Ocana by a narrow 7-5 tally, which gave the Scarlet and Black a 1-0 lead.

Previously, the Aztecs found themselves behind the proverbial eight-ball after the No. 2 combo of Mandma and Johannes Seeman dropped a 6-4 decision to Tvedt and Julien Penzlin. However, SDSU promptly knotted the round when the 57th-ranked duo of Victor Castro and Joe Tyler notched a 6-3 conquest of Sema Pankin and Eleftherios Neos at the top of the rotation, which set the stage for Auffray and Blair’s heroics.

Despite their good fortune, the Aztecs were unable to sustain the momentum early in singles play, as the Pilots (0-3) claimed the first three victories. Ocana wasted little time in disposing of Blair at the sixth position, racing to a 6-0, 6-0 win, while Castro was upended by Penzlin in the No. 3 spot, 6-2, 6-4. Shortly thereafter, Portland increased its advantage to 3-1 when Pankin defeated Seeman on the No. 1 court 7-6, 6-3.

Unfazed, San Diego State managed to stay alive when Auffray stormed back from an early deficit against Brown in the fifth position, where he ultimately prevailed 3-6, 6-2, 6-4. Over in the No. 2 spot, Tyler was also locked in a tight battle with Neos but survived a close shave of his own, 7-5, 2-6, 7-5.

With the score suddenly deadlocked at 3-3, all eyes quickly descended on the No. 4 court where Mandma and Tvedt fought tooth-and-nail for the deciding result. The two players were all squared at 3-3 in the tiebreaker before Mandma scored four straight points, as the Aztec contingent erupted in jubilation.

San Diego State will wrap up its weekend excursion to the Evergreen State on Sunday when it squares off against Washington starting at 11 a.m.  A link to live scoring and video will be available on GoAztecs.com.