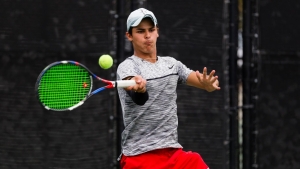 Aztecs improve to 1-1 on the season

January 26, 2019 (San Diego) - The San Diego State men’s tennis team notched the first win of its 2019 dual-match schedule with a 4-3 triumph over UC Irvine Saturday in a non-conference clash at Aztec Tennis Center.

Despite yielding the early doubles point, SDSU stormed back with four victories in singles play to even its record at 1-1 on the young season, while the Anteaters remain winless at 0-2.

The Aztec doubles tandem of Sander Gjoels-Andersen and Rafael Gonzalez Almazan took care of business with a 6-3 conquest of UCI’s Luis Lopez and Mateus Smolicki in the No. 1 doubles position. However, the Anteaters answered with two straight wins to grab a 1-0 advantage.

On court No.2, the Anteater duo of Vatsal Bajpai and Bruce Man-Son-Hing dispatched the SDSU pairing of Jan Kirchhoff and Ignacio Martinez by a 6-3 tally, while combo of Mason Hansen and Daniel Gealer duplicated the feat for the visitors after pinning an identical 6-3 defeat on Arnaud Restifo and Fabian Roensdorf in the third slot.

Stung, the Aztecs fought themselves off the ropes with a pair of victories of their own to open singles competition. Kirchhoff was the first SDSU player off the court after dismissing Gealer in the fifth position, 6-0, 6-3, while Gjoels-Andersen followed shortly with a 6-4, 7-5 triumph over Smolicki in the third slot, which put the home side in front 2-1 on the team scoreboard.

Moments later, the Scarlet and Black’s momentum was briefly interrupted by UCI’s Hansen, who claimed a 6-4, 6-3 decision over Restifo at No. 4, which knotted the score at 2-2.

Unfazed, the Aztecs regained the upper hand 3-2 thanks to a clutch performance by David Hough, who replaced an ailing Gonzalez Almazan at No. 6 and promptly dispatched Aaron Bailey, 6-2, 6-3. Meanwhile, Roensdorf had his hands full with Lopez on the No. 1 court, but the SDSU newcomer got stronger as the match progressed, ultimately pulling away for a three-set victory, 4-6, 6-4, 6-2, which provided the host school’s clinching point.

With the outcome no longer in question, the Anteaters’ Sasha Krasnov rallied past Martinez in the No. 2 position, 6-7(5), 6-3, 6-1, to account for the final score.

“I’m proud of the way our guys bounced back after dropping the doubles point,” said Aztec head coach Gene Carswell. “I thought they showed a lot of resiliency. We got some great senior leadership out of Sander (Gjoels-Andersen), who was a double winner today. We still have a lot of things to work on, but it was fun to watch a guy like Fabian (Roensdorf) get his first win and experience the moment of clinching a match for us. We also got a great effort from David Hough, who stepped in and took control at the No. 6 spot. I thought that was very impressive as well.”

San Diego State returns to the courts next weekend when it plays host to UC San Diego at Aztec Tennis Center starting at 10 a.m.