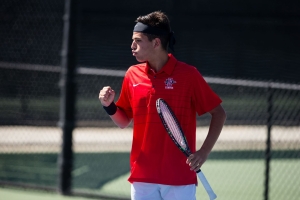 Aztecs even their record at 6-6 this season

March 23, 2019 (San Diego) - San Diego State snapped a two-match losing streak Saturday with a 4-1 triumph over Drake in the San Diego Spring Classic on the courts of Aztec Tennis Center.

SDSU dropped the doubles point in their third straight outing but stormed back to sweep all four completed singles matches to even their record at 6-6 on the year, while the Bulldogs slip to 14-11 overall.

After losing a grueling battle to Harvard on Friday, the Aztecs stumbled out of the gates vs. Drake, losing two encounters in the doubles round. Jan Kirchhoff and Ignacio Martinez were the first to sense the Bulldogs’ wrath, suffering a 6-1 setback to Vinny Gillespie and Ben Clark on the No. 2 court. Moments later, Sander Gjoels-Andersen and Rafael Gonzalez Almazan experienced a similar fate in the No. 1 position, falling victim to Bayo Phillips and Barny Thorold by a 6-3 count.

With the doubles outcome no longer in question, Fabian Roensdorf and Arnaud Restifo had their match at No. 3 abandoned after forging a slim 4-3 lead over Finley Hall and Calum MacGeoch.

Stung, the Scarlet and Black showed its grit and determination in singles play, with Kirchhoff sparking the resurgence with a 6-0, 6-2 victory over Thorold in the No. 3 position to raise his record to 7-3 this spring.

Over on court No. 5, Restifo kept things rolling with a 6-3, 6-1 conquest of Hall, while Roensdorf soon followed with a 6-4, 6-4 decision over Phillips in the second spot to put the brakes on a personal seven-match losing streak.

Two matches were halted when San Diego State posted the clinching tally, including Gjoels-Andersen, who raced to a 5-1 lead in the third set against Gillespie at No. 1 after splitting the first two by scores of 6-4 and 3-6. Likewise, Martinez dropped the opening set to MacGeoch, 6-2, on court No. 4, but won a tiebreaker in the second, 7-6(6), before opening up a 2-1 edge in set three.

“Drake is a good team,” said Aztec head coach Gene Carswell. “We were a little flat in doubles and they took advantage of that. But we had a heart-to-heart meeting between doubles and singles, and we knew we had to respond with greater intensity. I thought our guys did just that. I felt we had opportunities to win those singles matches, and I couldn’t be more proud of the way we competed until the very end.”

SDSU will close out the San Diego Spring Classic with another dual match on Sunday at Aztec Tennis Center. Opponent and time will be determined, with Wichita State among the possibilities.