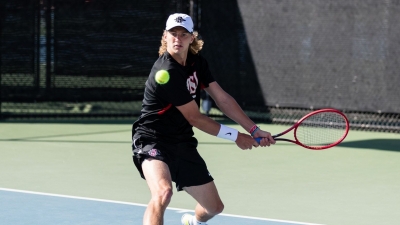 Aztecs to host 11 dual matches, including three vs. 2021 NCAA qualifiers

The first edition of SDSU’s spring slate commences with a home doubleheader on Saturday, Jan. 15, when the Scarlet and Black battles crosstown adversary UC San Diego and an opponent to be determined. Last season, the Aztecs swept a twin bill from the Tritons, winning by scores of 4-2 and 5-0 to raise their record to 11-0 in the all-time series.

Two days later, SDSU will make the short drive up the freeway to Orange County for its first road match of the year when it squares off against UC Irvine on Monday, Jan. 17. Despite dropping a 4-0 decision to the Anteaters last year, the Aztecs still maintain a 15-7 lead in 22 meetings since 1989.

On Jan. 21, San Diego State will play host to the first of three opponents that qualified for the NCAA Tournament last year when it welcomes East Tennessee State to The Mesa. The Aztecs have played the Buccaneers on two previous occasions, falling short in 2006 and 2011 in San Diego.

SDSU will embark on a four-match road swing over consecutive weekends, starting Feb. 4, when it heads to the Pacific Northwest for an engagement with Washington. The Scarlet and Black will look to turn the tables against the Huskies, who escaped with a narrow 4-3 last March at Aztec Tennis Center. San Diego State’s venture to the Emerald City of Seattle also includes a neutral-site encounter with Portland the following day on Feb. 5. The Aztecs will also battle the Pilots in a rematch on March 26 in San Diego.

SDSU returns to the Golden State for its next two matches but will remain road warriors, traveling to the Central Coast, Feb. 12-13, to face Loyola Marymount and Cal Poly on consecutive days.

The Aztecs will remain in San Diego County for their next seven events, beginning on Friday, Feb. 19, when they square off against Oregon, which qualified for the NCAA Tournament as well in 2021. Also included in that stretch is the prestigious Pacific Coast Doubles Championships at La Jolla Beach and Tennis Club, March 4-6, along with SDSU’s Mountain West opener vs. Air Force on March 13.  In addition, the Aztecs will play host to Gonzaga (Feb. 26), Penn (March 12), Hawai’i (March 19) and Portland (March 26) during that span.

As the calendar flips pages, San Diego State will engage five straight conference opponents, starting on April 8 with a quick trip to Sin City to face UNLV.  In its final two home matches, the Aztecs will lock horns with Utah State (April 10) and defending MW champion New Mexico (April 16) before closing out the regular season on the road at Boise State (April 21) and Nevada (April 23).

Following a two-year hiatus, the Mountain West Championship returns this season, with Air Force serving as host to the conference tournament April 29-May 1.

San Diego State returns both of its all-Mountain West honorees from a year ago in sophomore Johannes Seeman (singles, doubles) and junior Victor Castro (doubles). Seeman finished 20th in the ITA Southwest Regional singles rankings in 202, climbing to as high as No. 123 in the national ratings.

The Aztecs have bolstered their roster with the addition of senior Joe Tyler, a transfer from Iowa who was granted an extra season of eligibility due to the COVID-19 pandemic. Tyler racked up 56 singles victories in four years with the Hawkeyes, including 40 wins in dual-match competition.

This fall, Tyler joined forces with Castro to post a 7-2 record in doubles play, as the SDSU tandem reached the quarterfinals of the ITA Southwest Regional Championships in Malibu.