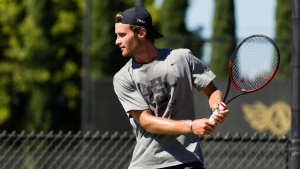 Gjoels-Anderson emerged triumphant in his encounter in the round of 256 against UT Arlington’s Mauricio del Rio, rallying from an early deficit to claim a three-set victory, 4-6, 6-3, 6-2.  The Aztec senior soon followed with a straight-set conquest of Hofstra’s Marcus Smith in the round of 128 by a 6-3, 6-4 count, setting up a with battle Jannik Giesse of Old Dominion in the round of 64, scheduled for Sunday morning at 9 a.m. CT/7 a.m. PT.

Sophomore Ignacio Martinez (Weston, Fla.) collected SDSU’s other victory in Saturday’s opening round, outlasting Marcello Moreira of Oral Roberts in a three-set tiebreaker, 6-2, 3-6, 7-6(6), before his progress was stymied in the round of 128 by Arizona’s Filip Malbasic, who registered a 6-2, 6-2 decision.

The Saint Francis Health System ITA All-American Championships continue on Sunday with round of 64 and round of 32 action in the pre-qualifying bracket, as well as consolation matches.

In Sunday’s consolation draw for SDSU, Kirchhoff will face Georgia Tech’s Brandon Freestone starting at 8 a.m. CT/6 a.m. PT, while Restifo will lock horns with Simon Junk of Ole Miss at a time to be determined.