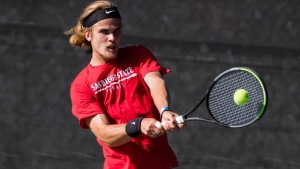 For the fourth time in its last eight outings, SDSU claimed the doubles point but faltered in singles, slipping to 4-13 on the season, while the Broncos even their record at 7-7 overall.

The Aztecs sprinted out of the proverbial gates in doubles play, as Judson Blair and Ignacio Martinez wasted little time in dispatching Dominic Barretto and Guillaume Dalmasso in the No. 2 position, capturing a 6-1 victory, while Rafael Gonzalez Almazan and Aaro Pollanen outlasted Mann Shah and Santiago Hinojosa in the third spot 6-4 to give the Scarlet and Black an early 1-0 lead on the team scoreboard.

With the doubles point safely tucked away, Johannes Seeman and Victor Castro had their battle suspended against Arthur Neuhaus and Vasileios Illiopoulos on the No. 1 court after nursing a 6-5 lead.

However, Santa Clara turned the tables in singles play, capturing the first three matches to seize the momentum. Martinez was the first to experience the Broncos’ charge, falling to Neuhaus in straight sets at No. 3 6-3, 6-2, while Pollanen suffered a similar fate in the fourth slot against Dalmasso 6-3, 6-4.

Over on the No. 1 court, Seeman fought valiantly to extend his battle into a third set but was clipped in a tiebreaker 7-6(4) after dropping the opener, 6-2.

Trailing suddenly 3-2, the Aztecs needed wins in the remaining two matches to pull out the team victory. However, Castro was edged by a break off serve in the third set of his encounter in the second position against Shah, who ultimately prevailed 6-4, 2-6, 6-3, securing the win for the visitors.

With Monday’s outcome no longer in question, the clash at No. 5 was suspended, where Gonzalez Almazan was left holding a 2-1 lead in the third set vs. Hinojosa after splitting the first two in narrow fashion 7-6(3), 5-7.