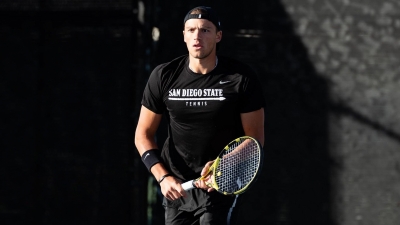 Aztecs’ Joe Tyler improves to 10-4 in singles with victory in No. 1 spot

February 12, 2022 (San Luis Obispo) - The San Diego State dropped its third straight match on Saturday after falling to Loyola Marymount, 4-1, in a neutral-site clash at Mustang Tennis Complex on the campus of Cal Poly.

With the loss, the Aztecs slip to 2-4 overall, while the Lions snapped a five-match losing streak, upping their record to 2-5 on the season.

Playing his first dual for the Scarlet and Black at the No. 1 singles position, senior Joe Tyler kept his unblemished spring record intact at 4-0 with a 7-5, 6-2 triumph over Dane Esses, improving to 10-4 overall.

However, the remainder of the SDSU contingent came up empty in the three other completed singles encounters, as LMU secured the victory.

Jules Auffray was unable to solve Daniel Moreno, dropping a 6-3, 6-2 decision in the No. 5 position, while Judson Blair experienced a similar fate in the sixth slot to Toky Ranaivo, 6-3, 6-3. Moments later, Alexander Mandma was upended in the fourth spot by Arthur Pantino in straight sets, 6-3, 6-4.

Johannes Seeman was the only other Aztec player to win a set on Saturday, tying his engagement with John Bryan Otico in the No. 2 spot, 3-6, 6-3, before the contest was abandoned early in the third set with the SDSU sophomore trailing 1-0.

In addition, Victor Castro found himself on the wrong side of 5-4 score in the second set against Jose Dominguez Alonso when his match was suspended as well. Earlier,the Aztec junior dropped a tight opening set, 6-4.

The doubles round wasn’t kind to the Scarlet and Black, either, as LMU captured both finished matches. Mandma and Seeman were dealt a 6-2 defeat by Dominguez Alonso and Ranaivo on the No. 2 court, while Castro and Tyler were edged by Moreno and Charles Roberts at the top of the ladder, 6-4.

San Diego State will remain on the Central Coast for a Sunday showdown with Cal Poly on Feb. 13, starting at 11 a.m. PT. A link to live results will be available on GoAztecs.com.