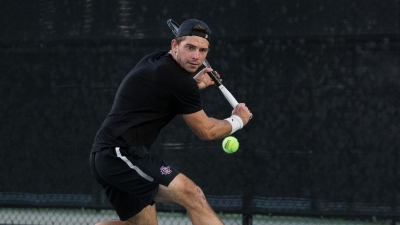 Aztecs roll past Tritons, improving to 12-0 in all-time series

“It was great to finally have some competition after our COVID-19 pause,” said Aztec head coach Gene Carswell. “I think we accomplished several goals in our opening match and this result is going to be very valuable for us moving forward.”

SDSU set the tone early by capturing the doubles point, with 2021 all-Mountain West honoree Johannes Seeman joining forces with Alexander Mandma for the clinching decision after defeating the UCSD tandem of Zach Ermert and Eric Silberman by a 6-3 count on the No. 2 court. Moments earlier, the Aztec duo of Victor Castro and Joe Tyler, who earned a No. 57 ITA ranking following the fall tournament schedule, rolled past Phillip Lan and Daniel Traxler by a 6-2 tally in the No. 1 position.

With the doubles outcome no longer in question, the No. 3 encounter pitting SDSU’s Jules Auffray and Judson Blair against Jett Cole and Pelayo Rodriguez was abandoned after the Aztec combo reached match point.

As dusk rapidly descended on The Mesa, San Diego State maintained its shine in singles play, posting four straight singles victories to squelch any hopes of a Triton comeback. First off the court was Blair, who made quick work of Tristan Taylor with a 6-1, 6-2 conquest at No. 6, while Seeman soon followed with a 6-4, 6-3 decision over Traxler at the top of the ladder.

Shortly thereafter, Mandma once again provided the requisite point for the Scarlet and Black with an impressive 6-2, 6-2 triumph over Cole in the fourth position.

“I was very happy for Alex to pick up that clinching victory,” Carswell said. “What a way to finish off his first dual match as an Aztec.”

With SDSU’s team victory on ice, the three remaining singles matches were allowed to continue through completion. Tyler witnessed success in his first dual match for the Aztecs after pinning a 6-4, 6-3 defeat on Lan in the No. 2 slot, while Castro overcame an early deficit to vanquish Rodriguez on the No. 3 court, 3-6, 6-4, 6-4. UCSD’s lone victory was recorded at No. 5, where Sahm Irvine upended Auffray, 6-0, 7-5.

“Overall, I was very pleased with our effort today,” Carswell added. “Judd was very efficient at No. 6, and I thought Johannes handled himself extremely well at the top of the order, so we’ll be looking to build on these performances.”

San Diego State will head to Seattle, Washington, for a pair of matches this weekend, squaring off against Portland at Nordstrom Tennis Center in a neutral-site clash on Saturday, Feb. 5, before battling host Washington the following day on Feb. 6. Both encounters are scheduled for an 11 a.m. PT start.