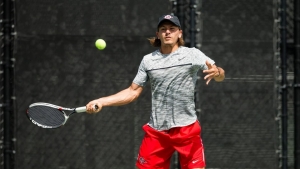 March 22, 2019 (San Diego) - Despite some spirited play in singles competition, San Diego State came up short against No. 38 Harvard on Friday, dropping a 4-1 decision to the Crimson to open the San Diego Spring Classic at Aztec Tennis Center.

After ceding the early doubles point, SDSU found itself in a closely contested singles round, where four matches were extended to three sets, while another encounter was decided by a pair of tiebreakers. However, the Aztecs mustered just one victory on the day, falling to 5-6 in dual matches, while Harvard raised its record to 10-4 overall.

SDSU was behind the proverbial eight ball from the outset, as the doubles tandem of Fabian Roensdorf and Arnaud Restifo suffered a 6-1 setback to Steven Sun and Harris Walker in the No. 3 position. Over on court No. 2, Jan Kirchhoff and Ignacio Martinez gave the Scarlet and Black some momentum with a 6-2 triumph over Brian Shi and Robert Wrzesinski. However, the duo of Sander Gjoels-Andersen and Rafael Gonzalez Almazan faced a tough assignment in the 33rd-ranked duo of Logan Weber and Andy Zhou, who secured the clinching point with a 6-3 victory in the No. 1 spot.

Unfazed, the Aztecs went back to work in singles play, where late substitute David Hough captured the first set, 6-2, in his encounter with Sun at No. 5, before his Harvard adversary turned the tables to take the final two sets going away, 6-0, 6-2. Moments later, the Crimson extended their lead to 3-0 after Shi outlasted Kirchhoff in the third slot, 7-5, 7-5.

SDSU finally dented the scoreboard when Restifo prevailed over Walker in a grueling three-setter, 6-7(5), 6-4, 6-3, in the fourth position. However, the Aztecs were unable to extend the match after Roensdorf was ousted in consecutive tiebreakers on the No. 2 court, 7-6(3), 7-6(3).

Two San Diego State players had a chance to close out their respective opponents, but had their matches halted when Harvard tallied the requisite fourth team point for victory.

After dropping the opening set to Wrzesinski at No. 1, 6-4, Gjoels-Andersen took care off business in the second by a 7-5 count and raced a 5-1 lead in the third. Over on court No. 6, Gonzalez Almazan found himself in a tight battle with Lane Leschly, trailing 6-5 in the third set after splitting the first two.

SDSU will play host to Drake on Saturday in their second match of the San Diego Spring Classic starting at 3:30 p.m.