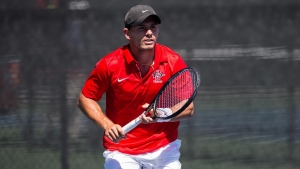 With the loss, the Aztecs fall to 12-9 on the year and 3-3 in conference play, while the Lobos won their seventh straight, improving to 11-6 overall and 6-0 in the MW.

SDSU ceded the doubles round for the first time in four outings after the UNM won the final two encounters to escape with the early 1-0 lead. The Aztecs claimed the first result when Arnaud Restifo and Fabian Roensdorf emerged with a 6-2 triumph over Tim Buttner and Nicolas Prieto in the No. 3 position. However, Facundo Bermejo and Dominic West turned the tables at No. 2, posting a 6-3 victory over Jan Kirchhoff and Rafael Gonzalez Almazan.

All eyes quickly turned to the No. 1 court where SDSU’s Sander Gjoels-Andersen and Ignacio Martinez were engaged in a tight battle with Ricky Hernandez-Tong and Stepan Holis before falling just short 7-5.

Stung, San Diego State was unable to generate much momentum in singles competition, losing three of four completed matches. Kirchhoff was the first to experience the Lobos’ wrath in a 6-2, 6-0 setback to West in the No. 2 slot. Moments later, Hernandez-Tong closed out Gjoels-Andersen, 6-3, 6-2, at the top of the ladder to give the host school a commanding 3-0 advantage in the team score.

The Aztecs finally got on the board after Restifo notched his fifth straight win with a 6-3, 6-3 conquest of Bermejo at No. 5. However, the Scarlet and Black could not prolong the match, as Roensdorf dropped a three-setter to Holis, 6-2, 1-6, 6-1, in the third position.

The remaining two encounters were promptly abandoned with both SDSU combatants holding slim leads. Martinez nudged in front of Butters 2-0 in the third set after splitting the first two, 6-4, 3-6, on court four, while Gonzalez was clinging to a 5-4 advantage over Prieto in the second set at No. 6 after winning the opener, 6-4.

San Diego State closes out its regular-season slate on Saturday, April 20 when it plays host to UNLV at Aztec Tennis Center. First serve is set for noon. The Aztecs will then venture to the Central Valley for the MW Championship April 25-27 in Fresno.