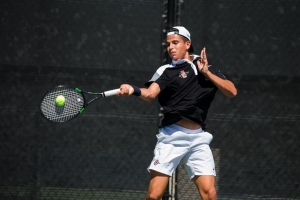 Jan Kirchhoff supplied the clinching point with a three-set triumph at No. 3 singles to help SDSU win its second straight and move to 7-6 on the season. Meanwhile, the Tigers slip to 10-9 overall with the loss.

The Aztecs shuffled their doubles lineup and the results paid off handsomely with a sweep in two completed matches. Sander Gjoels-Andersen joined forces with Ignacio Martinez for the first time since last October and promptly pinned a 6-3 defeat on the duo of Oscar Cutting and David Stevenson in the No. 1 spot.

In addition, Rafael Gonzalez Almazan and Nicholas Mitchell emerged victorious in their first pairing of the season after knocking off Matt Story and Jeremy Taylor by a 6-3 count on court No. 3.

With the doubles point safely in tow, Kirchhoff and Fabian Roensdorf had their encounter at No. 2 suspended after forging a 5-4 lead over Jan Pallares and Patrick Sydow.

Pallares put Memphis on the board and evened the score at 1-1 after dispatching Roensdorf, 6-1, 6-1, in the No. 2 position to earn the first singles decision. However, Gonzalez Almazan quickly defeated his Tiger adversary Turner Voges at No. 6 by a 6-3, 6-2 tally, setting a pattern for the remainder of the dual, as the two sides traded proverbial punches.

Cutting got past Arnaud Restifo in the fifth position, 7-5, 6-3, before Gjoles-Andersen put SDSU back in front 3-2 after dismissing Chris Patzanovsky at the top of the ladder, 7-5, 6-4.

With the team score knotted at 3-3 all eyes turned to the No. 3 court, where Kirchhoff rallied from an early to deficit to beat Taylor, 4-6, 6-4, 6-1, as his Aztec teammates erupted in jubilation.

San Diego State will have little time off to savor its victory before Eastern Washington invades Aztec Tennis Center for another non-conference dual match on Tuesday, March 26 starting at 2 p.m. Admission to all SDSU home tennis matches is free.