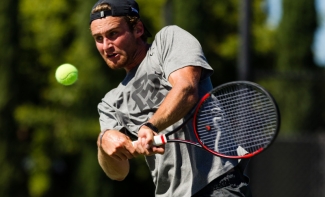 Photo:  Sander Gjoels-Andersen secured the Aztecs' win at UNLV with a victory at No. 3 singles.  Courtesy goaztecs.com

February 17, 2018 (Las Vegas) - The San Diego State men’s tennis team ended three weeks of frustration with its first victory of the season after rallying for a 4-3 triumph over UNLV on Friday in the Mountain West opener for both squads at Fertita Tennis Complex.

After dropping the doubles point, the Aztecs (1-6, 1-0 MW) stormed back with four wins in singles competition, including the final two of the evening in three sets to erase a 3-2 deficit on the team scoreboard.

SDSU drew first blood when the tandem of Santiago Cevallos and Rafael Gonzalez Almazan opened with a 6-3 conquest of the Rebels’ Jordan Sauer and Ruben Alberts at No. 3 doubles. However, UNLV (4-4, 0-1 MW) escaped with the early point after the duo of Alexandr Cozbinov and Courtney Lock subdued the Aztec pairing of Sander Gjoels-Andersen and Nicholas Mitchell by a 6-4 count on the No. 1 court, while Eric Samuelsson and Clayton Alenik dispatched Joel Popov and Arnaud Restifo in the No. 2 position by a 6-3 tally.

Stung, the Scarlet and Black quickly countered with a pair of wins to start singles play. Restifo made short work of Alberts in the second spot with a 6-1, 6-1 triumph, while Jan Kirchhoff registered his first dual-match victory as an Aztec after pinning a 6-1, 6-2 defeat on Sauer at No. 6 to put the visitors in front 2-1.

However, UNLV promptly stole the momentum after Cobzinov knocked off Cevallos at the top of the ladder, 6-3, 6-4, while Popov fell victim to Samuelsson in fourth slot, 6-1, 7-5.

The stage was now set for SDSU’s dramatic comeback, with Gonzalez Almazan outlasting Richard Solberg in the fifth position, 6-3, 4-6, 6-3, while Gjoels-Andersen overcame an early deficit against Lock at No. 3 before prevailing, 2-6, 6-3, 6-4.

“I’m very excited for our team,” said Aztec head coach Gene Carswell. “They’ve been putting in some good work on the practice court and it paid off tonight. It was a fun match to be a part of. Hats off to UNLV; they fought extremely hard. However, I could not be happier for our guys to start their conference season in this fashion.”

> The Aztecs are now 6-1 in their last seven conference openers.

> Rafael Gonzalez Almazan raises his singles record to a team-best 10-6 on the season.

San Diego State will remain in Las Vegas on Saturday to battle Oregon in a neutral-site encounter, starting at 11 a.m.