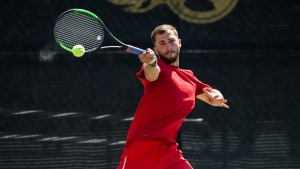 Hough improved to 3-1 on the weekend after recording a 6-4, 6-4 triumph over Southern Utah’s Remus Cope, while Gonzalez Almazan evened his record at 2-2 for the tournament, emerging with a 6-2, 6-2 victory over another Thunderbird adversary Jake Williams.

San Diego State returns to the courts later this month when it travels up the coast to participate in the ITA Southwest Regional Championships, Oct. 17-22, on the campus of Pepperdine University in Malibu, Calif.