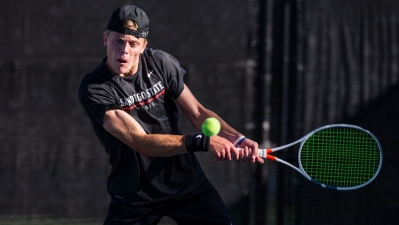 Just one day after posting three victories, the Aztecs came up empty on the final day of the inaugural event, which was held on the courts of Skip and Cindy Hogan Tennis Center.

Roni Rikkonen (Tampere, Finland) and Judson Blair (Salem, Ore.) both had their two-match winning streaks snapped at the hands of their Torero adversaries. Rikkonen was unable to extend his encounter with Blake Kasday, who prevailed in a second set tie-breaker to win, 6-3, 7-6(6), while Blair fell victim to Will Davies, 6-3, 6-1.

San Diego State will break for a two-month hiatus before opening its dual-match schedule on Saturday, Jan. 15, 2022, with a home doubleheader against UC San Diego and a team to be announced.