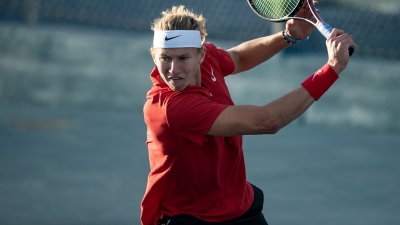 Johannes Seeman, Alexander Mändma are double winners for the Aztecs

Johannes Seeman and Alexander Mändma won twice for the Scarlet and Black, combining their talents to record a hard-four doubles victory over the Pepperdine tandem of Pietro Fellin and Eric Hadigian, 8-6.

Later in the afternoon, the Aztec teammates both emerged triumphant in three sets during singles competition against Nebraska, as Seeman toppled Nic Wiedenhorn, 6-4, 6-7(4), 6-3, while Mändma duplicated the feat against Victor Moreno Lozano by a score of 6-0, 4-6, 6-4.

However, Joe Tyler was not as fortunate in his encounter with Roni Hietaranta, dropping a 6-1, 6-4 decision to his Husker adversary. Meanwhile, Nebraska’s William Gleason spoiled Victor Castro’s bid for a perfect weekend, overcoming an early deficit to edge the SDSU junior in three sets, 4-6, 6-4, 6-4.

Earlier in doubles, Castro and Tyler joined forces to defeat the Loyola Marymount duo of John Bryan Otico and Isaac Becroft in a hard-fought tiebreaker, 8-7(4).

San Diego State returns to action next weekend when it splits the squad for a pair of tournaments. Select Aztecs will compete in the pre-qualifying rounds of the ITA All-American Championships in Tulsa, Oklahoma starting Saturday, Oct. 2, while another SDSU contingent travels to the desert for the three-day Wildcat Invitational Oct. 1-3 in Tucson, Arizona.