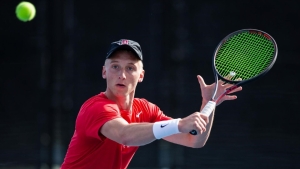 September 15, 2019 (Napa) -  Select members of the San Diego State men’s tennis squad wrapped up play at the Silverado Collegiate Invitational on Sunday, with two doubles tandems facing a pair of duos from UNLV, while three singles matches featured competitors from the University of Tulsa.

The Aztecs came up empty in doubles against their Mountain West rivals, as the pairing of Jan Kirchhoff and Aaro Pollanen fell victim to Milos Dabic and Tom Ciszewski in a tiebreaker, 8-7(4), while David Hough and Arnaud Restifo were dealt an 8-4 setback at the hands of Anton Ornberg and Jackson Atherton.

SDSU rebounded with a pair of victories in singles competition after Hough knocked off the Golden Hurricane’s Daniel Siddal, 6-3, 6-4, while Pollanen outlasted Tom Thelwall-Jones in a marathon tiebreaker, 6-3, 3-6, 7-6(10). Kirchhoff was not as fortunate, however, dropping a 6-1, 6-3 decision to Stefan Hampe.

In addition to the Aztecs, UNLV and Tulsa, the ninth annual event included players from Buffalo, Hawai’i, Oklahoma State and San Francisco.

San Diego State resumes its fall schedule next weekend when select individuals travel to the desert for the Wildcat Invitational Sept. 20-22 in Tucson, Arizona.