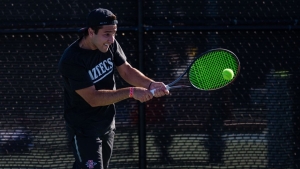 In the doubles final, the Aztecs’ fourth-seeded tandem of Victor Castro and Alexander Mändma dropped a hard-fought decision to Gonzaga’s No. 3 seeded duo of Matt Hollingworth and Sasha Trkulja, 8-6, ending their strong weekend run on a sour note.

Castro also experienced the same fate in the Flight 1 consolation singles final against Cal Poly’s Gary Vardanyan, who outlasted the SDSU junior by a count of 6-2, 7-6(4).

Rounding out the SDSU contingent was Judson Blair, who was edged by Arizona State’s Mortiz Hoffman in a super-tiebreaker for the Flight 2 consolation singles crown, 6-4, 4-6, 10-7. However, the Aztec sophomore rebounded in an added singles match with a 7-5, 6-2 victory over Grand Canyon’s Loic Van Zeggelar.

San Diego State continues its fall schedule next weekend when travels up the freeway to compete in the North Ranch Invitational Sept. 24-26 in Westlake Village, Calif.