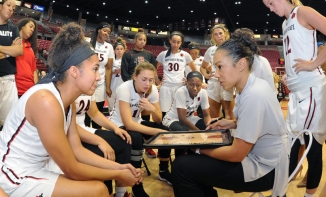 June 11, 2018 (San Diego) - San Diego State, in conjunction with the Mountain West has announced the women’s basketball league schedule for the 2018-19 season.

The conference format will remain the same with each team playing eight of the other 10 teams twice and playing two opponents once. This season, San Diego State will not play Wyoming at home and will not travel to play at Colorado State.

The Aztecs begin the conference slate with a bye so their first Mountain West game will not be until Saturday January 5th when they host the league champion from a year ago, Boise State.

SDSU then travels to Wyoming on January 9th for their lone game against the Cowgirls. Later in the week, the Aztecs return home, welcoming Air Force for a January 12th match-up.

The following week, the Aztecs play at New Mexico (Jan. 16) and then have their second and final bye of the season. SDSU has two byes in the first three weeks of the season.

Coming off the bye, SDSU hosts Fresno State (Jan. 23) before a Saturday game at UNLV (Jan. 26). The Aztecs will stay on the road, making the trip to Air Force (Jan. 30), for their first set of back-to-back road contests. SDSU then returns to the Mesa for consecutive home games, hosting San José State (Feb. 2) and New Mexico (Feb. 6).

The Aztecs then take on the Utah State Aggies for the first time, traveling to Logan, Utah for a February 9th game. SDSU then welcomes Colorado State on Wednesday, February 13th for their only meeting in the 2018-19 season.

SDSU then will be back on the road for a pair of games. First they play at Boise State on February 16th and before heading to Reno to battle the Wolf Pack February 20th.

Three of the Aztecs final five games will be in San Diego. They play host to UNLV (Feb. 23) and Utah State (Feb. 26) and then hit the road for games at San José State (March 2) and Fresno State (March 4). Their final game of the regular season will be Thursday March 7 when Nevada comes to Viejas Arena for senior night.

The Mountain West Tournament begins Sunday, March 10 at UNLV’s Thomas & Mack Center with seeds No. 6-11 in action. The tournament runs through Wednesday, March 13.