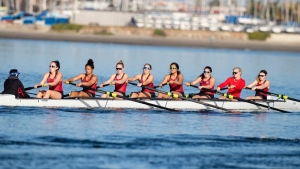 March 7, 2020 (Marina Del Rey, Calif.) - The Aztec rowing team competed at No. 20 UCLA Saturday morning at the UCLA Marina Aquatic Center in Marina del Rey, Calif. SDSU took second in all four races but posted competitive times against one of the top teams on the West Coast.

“It was a privilege to compete in UCLA’s Centenary Regatta and help to honor UCLA head coach Amy Fuller Kearney,” head coach Bill Zack said. “The Aztecs raced really well even though we finished second in each event. This can be a special team and we are excited to get back to training and work on getting even faster.”

“We remained composed the entire stretch but still fought like dogs to try to keep our bowball up with UCLA,” coxswain Hannah Broadland said after the race. “We executed everything the way we had planned and been instructed to do by our coach, which resulted in an amazingly fulfilling race.”