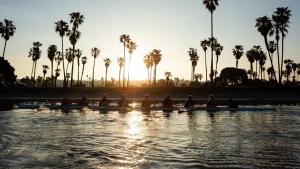 Aztecs won all three events they competed in

October 27, 2019 (San Diego) - The Aztec rowing team kicked off their 2019-20 season by winning all three events they competed in at the 19th annual Row for the Cure on Mission Bay Saturday morning.

“We are very happy with how well the entire team raced today,” head Coach Bill Zack said after the races. “Winning all three events we entered is great, but it was more important to come together as a team, along with parents and friends, to recognize the efforts of the Susan G. Komen organization. We’ll try to build on today’s results as we look ahead to the San Diego Fall Classic.”

Competing in breezy conditions against UCSD, LMU and USD, the Aztecs began the morning by having three of the top four times in the Open Eight competition. The SDSU “A” squad set the pace with a time of 12:15, 24 seconds faster than the next closest boat, the SDSU “B” boat (12:39). LMU’s A boat finished third (12:58) and were followed by the SDSU C (13:02).

The Aztec Novice Eight had an impressive showing with a time of 15:26, beating three Torero boats.

Emmie Frederico was the lone freshman in the V8 A boat. She represented Australia in the U19 eight at the 2017 World Rowing Junior Championships.

The Aztecs have one more race in 2019. They will be competing in the San Diego Fall Classic November 10.

Row for the Cure Complete Results