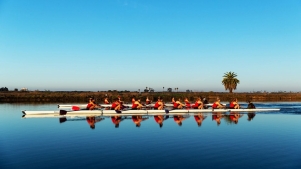 Aztecs will compete in four competitions in the San Diego aarea

February 12, 2021 (San Diego) - Head coach Bill Zack has released the 2021 schedule for the Aztec rowing team. SDSU will compete in six competitions, with four happening in the San Diego area.

The Aztecs first competition will be March 20 at USC, SDSU’s only true road event.

The following weekend (March 27) will be the annual San Diego Crew Classic. For precautionary reasons, this year’s regatta will be virtual. There will be live team racing on ergs, but some schools such as San Diego State, will still race on their home waters.

The next two competitions for the Aztecs will take place in Chula Vista at the Olympic Training Facility. On April 16, SDSU will take on crosstown foe UC San Diego and then the following weekend, they will race against UCLA and San Diego.

Their final tune-up before the conference championships will be against local programs UC San Diego and USD on the home waters of Mission Bay.

The American Athletic Conference Championship will be May 16 on Melton Lake in Oak Ridge, Tennessee.