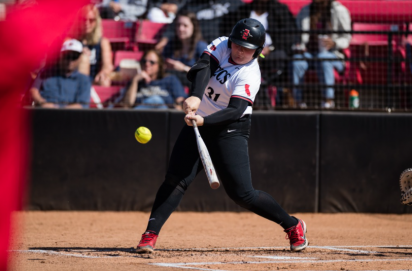 February 20, 2022 (San Diego) - Maggie Balint struck out a career-high 14 batters and San Diego State captured its third consecutive Campbell/Cartier Classic in a 3-0 victory over California Baptist Sunday afternoon at SDSU Softball Stadium. It was the second straight one-hit shutout for the Aztecs (9-2), who now own a Campbell/Cartier Classic-record six titles.

Balint (4-1) eclipsed her high of 13 strikeouts set twice before, including the opener this season against Middle Tennessee on Feb. 10. Balint struck out the side in the second and seventh innings, and had at least one in all seven frames. Out of the 14 strikeouts, 10 were swinging and four were looking. The right-hander allowed one hit - an infield single in the third - and no walks over the complete game shutout. On the season, Balint has 57 strikeouts against just four walks in 31 innings, and has four double-digit strikeout games in five appearances.

SDSU broke a scoreless tie in the bottom of the fourth on a double steal as Bella Espinoza stole second base and on the play Alexa Schulz scored standing up.

In the sixth, a sacrifice fly by Danielle Romanello plated Schultz. AJ Murphy followed with a bloop single to centerfield to score Espinoza from third.

Espinoza had two of San Diego State’s six hits and walked in her other plate appearance to lead the Aztec offense.

The Lancers (5-5) had two baserunners in the game and both reached second base on a single by Molly Kolander in the third and when Amanda Argomaniz reached on a SDSU fielding error in the fifth. Following a sac bunt to move Kolander in the third, Balint struck out Mia Alvarez looking and got Priscilla Estrada to ground out to shortstop Jillian Celis to get out of the inning. After Michaila Harrington replaced Argomaniz in the fifth and advanced to second on a sac bunt, Balint struck out Kolander looking and Shelby Arbeiter swinging to keep the shutout intact.

RHP Maggie Balint’s 14 strikeouts today are tied for the fifth most in a game in program history and most since Rebecca Arbino struck out 15 against Iowa State on March 8, 2013.