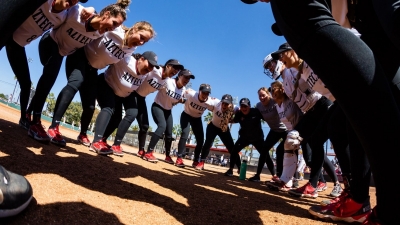 Aztecs improve to 12-6 on the season

March 4, 2022 (San Diego) - San Diego State scored five runs in the bottom of the fourth inning and rode the arm of Maggie Balint in a 6-2 victory over California on the second day of the San Diego Classic Friday night at SDSU Softball Stadium.

The Aztecs (12-6), who are now 2-1 against the Pac-12 this season, scored their five runs in the fourth on four hits and two Golden Bear (14-4) errors. Mac Barbara and Makena Brocki each had two-run singles in the inning for SDSU.

Balint (5-3), meanwhile, allowed two runs in the top of the first before settling down, finishing with 10 strikeouts against five hits and two walks. Balint, who retired 12 consecutive batters at one point in the game, now has double-digit strikeouts six times on the season out of her nine starts. The right-hander has 97 strikeouts on the year in 57 innings.