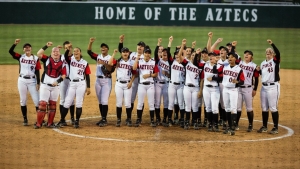 Tied at 1-1, the Aztecs (23-24, 10-10 MW) scored twice in the bottom of the sixth to put the game away. Kayla Sok replaced Shelby Thompson after a leadoff single, and moved to third on a sacrifice bunt by Kelsey Munoz and a fielding error by Bulldog  (33-17, 11-9 MW) shortstop Vanessa Hernandez. Taylor Adams followed with a grounder to Hernandez, but Sok was able to race home and get under the tag applied by catcher Kelcey Carrasco and put SDSU on top. Kiera Wright then hit a bloop single down the left-field line to plate Janina Jusay with an insurance run.

Following a walk with one out in the top of the seventh, Marissa Moreno relieved starter Alicia Garcia in the circle, and got Carrasco to foul out to Munoz at third base and pinch hitter Jane Nua to strikeout looking to seal the win for San Diego State.

The Aztecs got on the scoreboard in the first as Thompson scored from second base when FS second baseman Miranda Rohleder was unable to handle a ball hit by Adams.

Rachel Minogue tied it for Fresno State in the fourth with a one-out solo home run by Rachel Minogue just inside the right foul pole.

SDSU was led offensively by Thompson, who was 2-for-2 with a walk. Garcia, Munoz and Wright also singled for San Diego State.

Garcia (10-6) picked up the win after allowing one run on four hits and a walk over 6 1/3 innings, while striking out three. Moreno retired the two batters she faced in the seventh to pick up her fourth save of the season.

San Diego State improved to 18-6 on the season when scoring first.

RHP Marissa Moreno’s four saves this year are tied for the seventh most in Aztec single-season history, while her five career saves are tied for eighth in program history.

SDSU clinched the series over Fresno State for the first time since 2013.