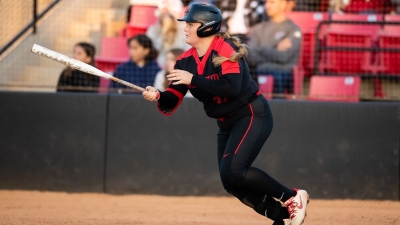 SDSU clinches at least a share of the Mountain West title

May 12, 2022 (Albuquerque) - San Diego State downed New Mexico, 7-1, to clinch at least a share of the Mountain West title and earn the league’s automatic bid into the NCAA tournament Thursday at Lobo Softball Field. The Aztecs (36-13, 19-3 MW) lead Boise State (17-5 MW) by a pair of games but own the tiebreaker after winning two of three contests with the Broncos from April 14-16.

SDSU can secure the outright MW championship with either a win on Friday or a Bronco loss at Colorado State. San Diego State extended its conference record with its eighth regular-season title but first since 2014. The Aztecs’ other MW championships came in 2002, 2003, 2006, 2008, 2012 and 2013, with the first seven being outright crowns.

Makena Brocki hit a three-run home run and Bella Espinoza had a career-high three RBIs for SDSU, which scored the final seven runs of the game.

After the Lobos (25-26, 5-17 MW) took a 1-0 lead in the bottom of the first inning on a Leslie Romero RBI single, San Diego State answered in the top of the second.

Jillian Celis (walk, stolen base), Danielle Romanello (fielding error, stolen base) and Brocki (hit by pitch) loaded the bases, and with two outs Espinoza singled up the middle to score Celis and Romanello. UNM pitcher Amber Linton, however, struck out Mac Barbara looking to keep the damage to two runs.

The Aztecs added to their lead in the fourth as Espinoza found herself up with the bases loaded once again when Romanello (error), Brocki (walk) and Nicole Siess (single) all reached with one out. Espinoza drove in pinch runner Audrey Kull with a fielder’s choice groundout to make it 3-1 SDSU. Barbara followed with an infield single but Linton struck out Taylor Adams swinging to strand three San Diego State baserunners.

AJ Murphy led off with a single for the Aztecs in the fifth, advanced to second on a Celis groundout and scored on an Alexa Schultz single up the middle. After Romanello was hit by a pitch, New Mexico went to the bullpen for Emma Guindon. Guindon’s first pitch to Brocki, however, was drilled over the left-field wall to make it a 7-1 SDSU advantage.

Neither team reached third base the rest of the game.

Brocki reached all three plate appearances in the game for San Diego State with a hit by pitch, walk and three-run home run. Adams added a pair of singles, while Barbara reached base twice with a single and a walk.

Maggie Balint picked up the win for the Aztecs, allowing one run on seven hits and two walks over seven innings, striking out five. It was Balint’s (17-5) 11th complete game of the season.

San Diego State won its 24th straight game when leading at any point (34-3 on the season).

The Aztecs became the first team in the country to secure their league’s automatic bid into the NCAA tournament.