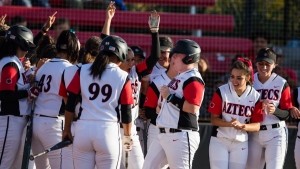 May 11, 2019 (Logan, Utah) - The San Diego State softball team used a two-run home run by Molly Sturdivant and a three-hit complete game from Marissa Moreno to down Utah State, 2-1, Saturday afternoon in Logan, Utah. The Aztecs finished their season with a 25-26 record, including a 12-12 mark in Mountain West play.

Down 1-0, SDSU finally broke through in the top of the sixth inning when Katie Byrd singled and Sturdivant followed with a home run well over the center field fence. It was the fourth home run of the season for Sturdivant and 23rd of her career.

San Diego State loaded the bases in the top of the first inning on a Kiera Wright single, an Aggie (17-30, 6-17 MW) error and a walk to Sturdivant. Kelsey Munoz ripped a hard hit ball, but USU first baseman Bailee Trapp was able to snag the ball and touch first for the inning-ending double play.

Utah State took the lead in the third when Riley Plogger’s two-out double on a 0-2 pitch scored Stephanie Reed from first base.

The Aztecs loaded the bases once again in the fifth on singles by Taylor Adams and Kristen Parker, and a walk to Shelby Thompson. Pinch hitter Maddi Ayers made good contact, but Aggie rightfielder Mia Maher tracked the ball down and made the catch in right-center field, keeping SDSU off the scoreboard.

Sturdivant then put San Diego State in the lead for good in the sixth.

The two runs was plenty for Moreno (12-12), who allowed just three hits and a hit batter over the complete game win, while striking out four.

Sturdivant was 2-for-2 with two RBIs, a run and a walk to pace the Aztec offense, which outhit the Aggies 8-3.  Thompson also reached base twice safely with a single and a walk.

The Aztecs finished the season 19-7 when outhitting their opponent.

Moreno and Sturdivant; Toone and Lewis