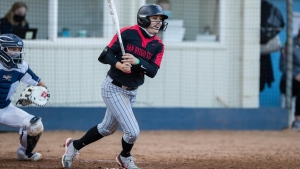 SDSU falls to 6-3 on the season

SDSU was unable to get much offense going against UW’s two-time All-American pitcher Gabbie Plain. A day after scratching out three hits and striking out 12 times against the right-hander, San Diego State had two hits today and struck out 13 times.

In all, the Aztecs reached base four times in the game, including a double by Jillian Celis, a single by Danielle Romanello and two walks drawn by Sadie Langlet.

After being held scoreless through the first two innings, Washington got on the scoreboard with a two-run homer by Baylee Klingler in the top of the third. The Huskies then added solo scores in each of the next three innings, including an RBI single by Lilly Agan in the fourth that scored Livy Schiele, a sacrifice fly by SilentRain Espinoza in the fifth which plated Sis Bates and a fielder’s choice RBI by Agan in the sixth where Schiele just barely beat the throw home.

In the mentioned sixth inning, SDSU relief pitcher Marissa Moreno got out of a one-out, bases loaded jam following the run by getting Bates to ground into a fielder’s choice back to her in the circle for the force out at home and Morganne Flores to pop up to second baseman Shelby Thompson to end the inning.

Hannah Johnson got the start in the circle for San Diego State and allowed one hit in two innings. Maggie Balint, who one-hit UW in the nightcap on Friday night, scattered four runs today on six hits and two walks over three innings of relief, falling to 3-2 with the loss. Moreno pitched around three walks and a hit over two innings, allowing just one unearned run.

Four of the Aztecs’ nine games this season have come against teams ranked in the top 5 in the country (SDSU is 1-3 in those games and 6-3 overall).

San Diego State is the first team to win a game in a three-game weekend series against Washington since Utah won the series finale on April 20, 2019. If you include two-game weekend series, the Huskies had swept four straight series prior to this weekend dating back to the Utah series (April 18-20, 2019).

The Aztecs play a doubleheader at California Baptist Friday (March 5) beginning at 4 p.m. before hosting CBU in a single game at 1 p.m. Saturday.