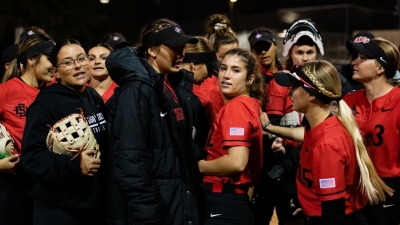 March 5, 2022 (San Diego) - San Diego State dropped a pair of games on the third day of the San Diego Classic Saturday night at SDSU Softball Stadium. The Aztecs (12-8) first lost to Yale 7-3 before falling to Long Beach State 2-1 in the nightcap.

Playing as the home team, Yale had a pair of two-run home runs in the bottom of the second inning and added another run in the third on a fielder’s choice.

San Diego State, which had at least one baserunner in all seven innings, first threatened in the fourth when Jessica Cordola led off with a triple. Cordola, however, was thrown out at the plate trying to score on a grounder by Alexa Schultz. The Aztecs still loaded the bases in the inning on a Danielle Romanello walk and Makena Brocki hit by pitch, but Macey Keester flied out to center field with two outs to keep SDSU off the scoreboard.

Mac Barbara finally got San Diego State a run in the fifth with a solo homer well over the right-field fence. It was her eighth home run of the season in 20 games.

Yale answered with an RBI double in the fifth and an RBI single in the sixth to take a 7-1 lead.

After stranding a runner on second in the sixth, the Aztecs rallied in the seventh as Taylor Adams led off with a pinch-hit double. After a strikeout, Adams got to third on a bunt single by Bella Espinoza. While Espinoza was in a planned rundown between first and second, Adams raced home for SDSU’s second run of the game. Barbara popped out in foul territory to the first baseman, but Cordola doubled down the left-field line to knock in Espinoza. Bulldog pitcher Nicole Conway, however, got Schultz to ground out to third to end the game.

Cordola and Espinoza each had two hits apiece for San Diego State, which was outhit, 12-8, in the game. Romanello also reached base twice with a single and a walk.

SDSU once again had plenty of scoring opportunities in the nightcap against the 49ers (8-10) but couldn’t capitalize in a 2-1 loss.

Kara Snyder singled in Naomi Hernandez with LBSU’s first run in the top of the third inning and Hernandez doubled in Jacquelyn Bickar in the fourth for its other run.

After stranding a runner on third in the second and a runner on second in the third, SDSU got on the scoreboard in the bottom of the fourth. Cordola led off with a single and was replaced by Audrey Kull. Kull moved to second on a sacrifice bunt by Adams and to third on a Romanello groundout. With runners on first and third following an AJ Murphy walk, Nicole Siess laid down a perfect bunt down the third-base line to score Kull from third. Murphy got to third on the play, but Brocki struck out swinging to end the inning in San Diego State’s last good chance to score.

Like the first game, the Aztecs had at least one baserunner in all seven innings and left eight on base. SDSU finished 1-for-16 (.063) with runners on base and 1-for-9 (.111) with runners in scoring position.

Adams was 2-for-2 with a stolen base for San Diego State, while Espinoza singled and walked.

Allie Light was credited with the loss after giving up one run on six hits as the starter over three innings, striking out two. Maggie Balint pitched the final four innings, yielding one run on four hits, while striking out seven.

With the 2-1 loss to Long Beach State, the Aztecs fell to 1-5 on the season in one-run games.

Eight of SDSU’s 20 games so far have come against teams that made the 2021 NCAA tournament (San Diego State is 3-5 in those games).

SDSU looks to get back on the winning track on the final day of the San Diego Classic on Sunday with games against Stony Brook (11 a.m.) and Boston University (1:30 p.m.).