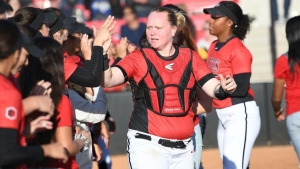 CSU quickly got two runners into scoring position on the seventh on a single, fielder’s choice and sacrifice bunt. Kaitlyn Cook then singled over a drawn-in outfield to score Amber Nelson with the winning run.

SDSU jumped out to an early lead in the top of the first inning when Shelby Thompson took the first pitch she saw over the left-center field fence. It was her third home run of the season.

CSU answered in the bottom of the first on back-to-back RBI doubles by Tara Shadowen and Nelson.

San Diego State had a two-out rally in the second on a single by Alicia Garcia and a double by Kristen Parker, but Colorado State pitcher Bridgette Hutton struck out Aris Metcalfe swinging to get out of the inning.

The Rams threatened again in the second with a pair of runners on base. With one out, Marissa Moreno relieved Garcia in the circle, and struck out Haley Donaldson swinging and got their No. 3 hitter Tara Shadowen to pop out to Thompson at shortstop to get the Aztecs out of the jam.

SDSU took back the lead in the third when Molly Sturdivant drilled a two-run homer well over the left-field fence. It was her third home run of the season.

CSU quickly got two runners aboard in the third on a pair of singles, but Moreno recorded three straight outs to maintain San Diego State’s one-run lead.

Colorado State finally got to Moreno in the fourth when Shadowen’s two-out single scored Danni Klein from second base, tying the game at 3-3.

The Aztecs got two runners on base in the fifth and Sturdivant followed with a single through the right side, but West Hills alum Katie Byrd was thrown out in a close play at the plate by Shadowen in right field.

The Rams then ended the game in the seventh with the Cook single.

Garcia and Sturdivant had two hits apiece for SDSU, which was outhit, 10-8, in the game. Byrd also singled and walked.

San Diego State fell to 11-5 on the season in one-run games.

The Aztecs lost their first MW series since being swept by UNLV from March 29-31.

CF Kiera Wright was thrown out trying to steal second base, the first time she has been caught stealing in 20 chances this season. Lori Turken (1982) now has the most stolen bases (18) in SDSU single-season history without being thrown out.

SDSU plays host to Fresno State next weekend in its final home series of the season, beginning at 6 p.m. on Friday.