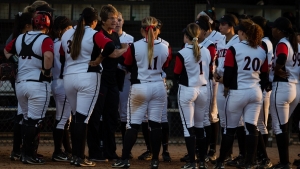 Aztecs leave 10 runners on base in series opener

SDSU threatened early as both West Hills alum Katie Byrd (walk) and Kelsey Munoz (single) got into scoring positon with one out. Aggie (16-29, 5-16 MW) pitcher Kapri Toone, however, got Molly Sturdivant to ground back to her in the circle for the first out and Taylor Adams to ground out to second base to get out of the jam.

In the second, San Diego State loaded the bases on a pair of singles by Alicia Garcia and Kiera Wright, and a walk to Shelby Thompson. Toone (4-12) once again got out of the inning by striking out Byrd swinging.

After retiring the first nine batters she faced, Aztec pitcher Marissa Moreno ran into trouble in the bottom of the fourth inning when USU quickly loaded the bases on a fielding error, hit batter and hit by pitch. Moreno got Utah State’s best hitter Lexi Orozco to ground to Munoz at third base for a fielder’s choice at the plate with the first out, but Bailey Trapp followed with a single through the right side to score Stephanie Reed for the first run of the game. Bailey Lewis then hit a sacrifice fly to left fielder Kristen Parker to plate Kenzi Bolin. After a four-pitch walk to Erin Kuba, Moreno struck out Ryan Holmes swinging to get the Aztecs out of the inning.

SDSU tied it in the fifth with a two-out double by Sturdivant that scored Byrd and Munoz.

USU took the lead back in the sixth when Trapp singled and Lewis followed with a double. Alicia Garcia replaced Moreno (11-12) in the circle, but Kuba doubled to left-center field to score a pair of pinch runners and make it 4-2.

San Diego State loaded the bases in the seventh on a Thompson single and back-to-back Utah State errors by Orozco at shortstop. Adams followed with a bloop single to right field to score Thompson, but Toone got Garcia and pinch hitter Paige Barth to ground into fielder choices to give Utah State the 4-3 win.

Thompson was 1-for-2 with two walks and a run, while Munoz singled, walked and scored.

Moreno took the loss after allowing four runs (two earned) on four hits and two walks over 5 1/3 innings, while striking out three. Garcia yielded two hits in 2/3 innings of relief.

The Aztecs fell to 18-6 on the season when outhitting their opponent.

Molly Sturdivant’s double was the 35th of her career, which is tied with Monica Alnes (2006-07, 09-10) for the sixth most in program history (teammate Katie Byrd ranks fourth with 38).