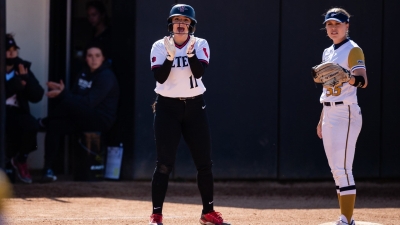 SDSU jumped out to a lead in the top of the first inning when Bella Espinoza led off with a walk and later scored on a single by Alexa Schultz. Later in the inning Mac Barbara drew a two-out, four-pitch walk and Jessica Cordola followed with a double to make it 2-0 San Diego State.

The Mountain West defending champion Bulldogs (6-23, 0-5 MW) answered with three runs in the bottom of the first. Two of the three runs came on a triple by Kacey Hvitved, who then scored on a double by Bailey Williams.

The Aztecs had chances after the two-run first but stranded a leadoff Makena Brocki double in the second and two runners in the third.

SDSU didn’t waste its opportunities in the fourth, however, scoring three runs with two outs. Nicole Siess got things going with a single, then moved to second on an Espinoza single and scored on a single by Jillian Celis. Cassidy West replaced Marley Hanlon in the circle, but Schultz knocked in both runners with a single.

Alesia Danby halved San Diego State’s lead with a leadoff home run in the fourth but that would be the last run of the game.

The Bulldogs mounted one last effort in the bottom of the seventh when Alyssa Orr was hit by a pitch with one out and later advanced to third on a two-out single by Vanessa Hernandez. San Diego State pitcher Maggie Balint, however, struck out Hvidved swinging to end the game and clinch the series for the Aztecs.

Schultz was 3-for-4 with three RBIs and a stolen bases for SDSU, which outhit FS, 10-6. Cordola and Brocki each recorded a single and a double, while Espinoza singled, walked and scored a pair of runs. Barbara walked twice and scored a run, and has now reached base safely in 25 straight games.

Dani Martinez picked up the win for San Diego State after allowing one run on two hits in 3 1/3 innings of relief, while striking out one. Martinez is 4-2 on the season. Allie Light started the game and gave up three runs on two hits and two walks in 0 2/3 innings, recording one strikeout. Dee Dee Hernandez pitched the fifth with one walk and a strikeout before Balint shut the door with two hits allowed in two innings of relief, striking out three to pick up her second save of the season.

The Aztecs improved to 20-3 on the season, including 10 straight wins, when leading at any point in the game.

After starting the season 1-6 in one-run games, SDSU has won its last two one-run encounters.

The Aztecs will look for the sweep in the series with the finale taking place at noon on Sunday.