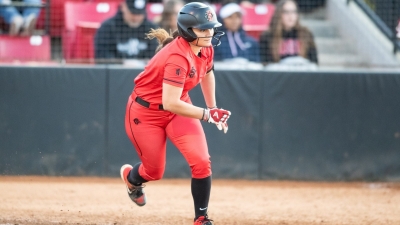 After the Gauchos (8-21) forced extra innings in the bottom of the seventh inning on a RBI groundout and neither team could take advantage of baserunners in the eighth, SDSU went to work in the ninth with the international tiebreaker rule in effect. Riley Thies was placed on second and moved to third when Danielle Romanello reached on an error. One batter later Jillian Celis stroked a single through the left side to score Thies with the go-ahead run. Romanello, who had advanced to second on the same error, then got to third on another UC Santa Barbara error before scoring on a single by Makena Brocki.

The Gauchos, who had tied the game up with San Diego State at 2-2 in the sixth and then again at 3-3 in the seventh, made it a 5-4 game in the bottom of the ninth when Sammy Fabian singled and a sacrifice fly by Maci Fines scored Tyler Goldstein, who began the inning at second base via the international tiebreaker. Aztec pitcher Maggie Balint, however, struck out Madelyn McNally swinging and got Rayna Cohen to pop out to second baseman Shelby Thompson to end the game.

SDSU got on the scoreboard in the first as Thompson was hit by her fourth pitch of the weekend, stole second and scored on a double by Alexa Schultz.

San Diego State made it 2-0 in the third when Sara Lillie reached on an error, which plated Romanello. The Aztecs had the bases loaded at the time but were unable to get another runner home.

SDSU took the lead back in the seventh as a Schultz single knocked in Thompson.

UC Santa Barbara then forced extra innings in the seventh as a Cohen one-out groundout scored Fabian, setting up San Diego State’s two-run ninth and holding on for the 5-4 victory.

Schultz had two hits, two RBIs and a walk to pace the Aztecs, who tied a season high by leaving 13 runners on base. Celis and Thies added two hits apiece, Thompson walked twice and scored a pair of runs, and Alyssa Pinto singled and walked.

Balint (12-5) picked up the victory after allowing two runs (one earned) on eight hits over eight innings of work, striking out eight without issuing a walk. Marissa Moreno pitched one inning of relief, yielding two runs on four hits and a walk.

SDSU improved to 4-1 on the season in extra-inning games.

San Diego State has a four-game winning streak, its longest since starting out the season 5-0.

RHP Maggie Balint struck out eight in eight innings today without issuing a walk. In the three-game series, she was 2-0 with a save and a 0.42 ERA, striking out 17 without allowing a walk in 14 2/3 innings.

The Aztecs resume Mountain West play next weekend against San José State, playing two games on Saturday (2 p.m.) and one on Sunday (noon).