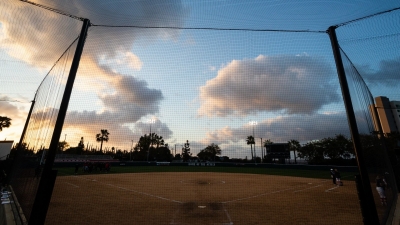 The lone runs of the game came in the bottom of the fourth inning when the Rams (13-20, 7-11 MW) finally got to SDSU starting pitcher Maggie Balint. With just one hit through the first three innings, Tara Shadowen reached on a one-out single and one batter later Corina Gamboa homered just inside the left-field foul pole.

San Diego State had plenty of chances but couldn’t get a run across the plate against CSU pitcher Jessica Jarecki, who was playing in her final home game for Senior Day.

In the top of the fourth, Jillian Celis drew her second four-pitch walk of the game, and moved to second base on a sacrifice bunt by Alexa Schultz and to third on a groundout by Sadie Langlet. Danielle Romanello followed with a walk to put runners on the corners, but Jarecki (4-9) struck out Jeweliana Perez swinging to get out of the jam.

In the sixth, Shelby Thompson ripped a hard-hit ball off the glove of Gamboa at third base, which went down as an error. Celis reached on another Gamboa error, but Jerecki struck out Schultz swinging, got Langlet to pop into an infield fly and Romanello to ground out to second baseman Maya Matsubara to keep the Aztecs off the scoreboard.

In the seventh, Sara Lillie was hit by a pitch with one out and Taylor Adams broke up Jarecki’s no-hitter with a single up the middle. Jarecki struck out pinch hitter Jessica Cordola and Thompson followed with a single off the glove of Jarecki to load the bases. Celis hit a fading line drive but Shadowen was able to track the ball down in left field for the final out of the game.

Balint (16-7) was the tough luck loser for the Aztecs, allowing two runs on six hits over six innings. She struck out two without issuing a walk.

Celis (two walks), Adams (single), Thompson (single), Romanello (walk) and Lillie (hit by pitch) were the only runners to reach base safely for SDSU, which left eight runners on base in the game and 31 in the weekend series.

San Diego State was shut out for the first time since the first game of a doubleheader on April 17 against San José State. The Aztecs scored 65 runs over the 10 games in between shutouts, averaging 6.5 runs per game.

San Diego State plays host to Fresno State in the final regular-season series this weekend (May 14-15) at SDSU Softball Stadium.

Balint and Romanello; Jarecki and McGuffin