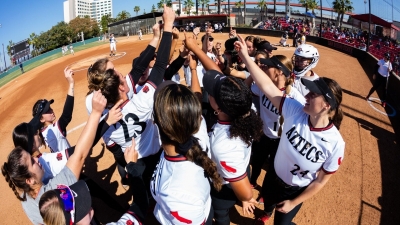 March 3, 2022 (San Diego) - San Diego State fell in eight innings to Brigham Young 2-1 on the first day of the San Diego Classic Thursday night at SDSU Softball Stadium. The last three losses for the Aztecs (11-6) have come in extra innings by one run apiece.

Violet Zavodnik hit a two-out home run over the left-field wall in the top of the eighth inning for the Cougars (10-4). Chloe Temples then retired SDSU in order in the bottom of the eighth to secure the win.

BYU broke a scoreless tie in the fifth when Marissa Chavez singled with one out and scored on a triple by Alyssa Podhurcak. San Diego State starting pitcher Maggie Balint got out of the jam by getting Brooke Hill-Barrington to pop into a double play to third baseman Makena Brocki, who threw it to shortstop A.J. Murphy for the forceout.
The Aztecs tied it in the bottom of the fifth when Brocki hit a one-out triple to right-center field and scored on a fielder’s choice by Jillian Celis. Celis promptly stole second and advanced to third on an infield single by Alexa Schultz, but Brigham Young starter Autumn Moffat-Korth struck out Mac Barbara swinging and got Danielle Romanello to ground out to third base to keep the game tied at 1-1.
The Cougars had consecutive two-out singles in the seventh, but SDSU reliever Dee Dee Hernandez got Hunter Ava to ground back to her in the circle to give San Diego State a chance to end the game in regulation.
Brocki led off with a five-pitch walk and moved to second on a sacrifice bunt by Celis. Temples (3-1), however, struck out Schultz looking and got Barbara to ground out to first base to force extra innings.
Altogether, San Diego State was 1-for-12 with runners on base and 1-for-7 with runners in scoring position.
Espinoza had two hits to pace the Aztec offense, while Schultz (single, walk) and Brocki (triple, walk) also reached base safely twice in the game.
Hernandez (2-2) took the loss after allowing one run on four hits over three innings, while striking out three. Balint gave up one run on three hits and a walk over five innings, striking out seven.
THE NOTE
The Aztecs fell to 1-4 in one-run games this season (SDSU is 10-2 in its other games).
THE NOTE II
San Diego State dropped to 1-3 in extra-inning games this year.
STAT OF THE DAY
The last three losses for the Aztecs have each been by one run. The last time SDSU had its last three losses by one run was its final three losses of the 2019 season (April 28 at Colorado State (L, 4-3), May 9 at Utah State (L, 3-4) and May 10 at Utah State (L, 6-7).
UP NEXT
San Diego State will continue its play in the San Diego Classic Friday with games against Boston Univ. (2:30 p.m.) and California (5 p.m.)
Brigham Young 2, San Diego State 1 (8 innings)
Brigham Young (10-4)           000 010 01 -- 2 7 0
San Diego State (11-6)          000 010 00 -- 1 5 0
Moffat-Korth, Temples (7) and Simmons; Balint, Hernandez (6) and Romanello
W - Temples, 3-1; L - Hernandez, 2-2
HR: Brigham Young, Zavodnik (2)
Box