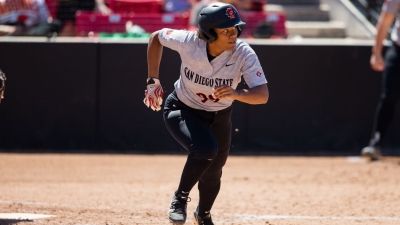 February 26, 2020 (Riverside) -  In a pitchers’ duel, the San Diego State softball team was edged by California Baptist, 1-0, in eight innings Wednesday night at John C. Funk Stadium. The Aztecs fell to 11-7 with the loss.

The game featured the 1-2 combo of SDSU pitchers Hannah Johnson and Marissa Moreno, and the Kerisa Viramontes for the Lancers (5-10). Johnson and Moreno (3-1) combined for 10 strikeouts and just four hits allowed, while Viramontes (3-4) scattered three hits and five walks, while striking out 12 for the complete game shutout.

With the international tiebreaker rule in effect in the top of the eighth inning and San Diego State’s Jillian Celis placed at second base, Kiera Wright drew a one-out, four-pitch walk. Sara Lillie hit a fly ball to centerfielder Caitlyn Lloyd, but Lloyd’s errant throw to third allowed the runners to move up a base. Viramontes, however, struck out Thompson looking to move to the bottom of the eighth.

Ali Belloc promptly advanced Molly Kolander with a sacrifice bunt for CBU and Makenna Stram followed with a single to right-center field for the walk-off single.

Johnson tossed three scoreless innings as the starter for the Aztecs, allowing two hits and a walk, while striking out five. Moreno was the tough luck loser after giving up one unearned run on two hits over 4 1/3 innings of relief, striking out five.

The first chance for either team came in the top of the second inning when Kelsey Munoz led off with a walk for SDSU and stole second base. Viramontes, however, struck out Sadie Langlet, Alexa Schultz and Riley Thies in succession to keep the game scoreless.

California Baptist appeared it would take the lead in the bottom of the second when Katelyn Mangrello (single) and Nicole Stark (double) each got into scoring position with not outs. San Diego State’s Johnson came up big with strikeouts of Kolander and Ali Belloc swinging, and getting Makenna Stram to pop out weakly to Aztec shortstop Shelby Thompson to get out of improbable jam.

In the fourth, SDSU put together a two-out rally when Munoz and Langlet each had consecutive singles, the first hits allowed by Viramontes. Schultz, however, struck out swinging to keep the score at 0-0.

The Lancers got into scoring position once again in the fourth as Mangrello had a one-out single and was replaced by Michaila Harrington. A groundout moved Harrington to second, but Moreno struck out Kolander swinging to move on to the fifth.

The Aztecs looked to get the first run of the game in the seventh as Langlet led off with her second single of the game and was replaced at first base by Makayla Jordan. Jordan then moved to second base on a sacrifice bunt by Kristen Parker, but Viramontes struck out pinch hitters Jessica Cordola and Summer Hargett swinging to get out of the inning, setting up the walk-off hit in the bottom half of the inning.

Langlet had two of SDSU’s three hits in the game, while Lillie drew a pair of walks.

SDSU dropped to 4-3 in one-run games this year.

San Diego State fell to 2-1 in extra-inning games this season.

The Aztecs co-host the San Diego Classic this weekend, including games with Weber State at 7 p.m. Friday, St. John’s (2 p.m.) and No. 1/1 UCLA (7 p.m.) on Saturday, and CSUN at 2 p.m. Sunday. Altogether, 13 games will be held at SDSU Softball Stadium over the weekend with five games set for Friday and Saturday, beginning at 9 a.m. and three on Sunday with a 9 a.m. start.