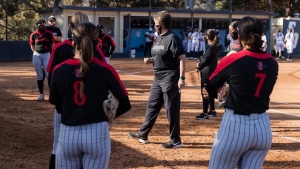 Bruin (6-0) pitcher Megan Faraimo threw a perfect game, the 19th in UCLA history, striking out five. Offensively, the Bruins had three home runs, including two by Delanie Wisz, four doubles and a triple.

Down, 3-0, in the second inning, it appeared SDSU was going to get out of the inning when Aaliyah Jordan hit a bouncing ball to first baseman Alyssa Pinto with two outs. Pinto, however, tried to get UCLA’s Kelli Godin at home instead of the force at first. Godin was able to beat the pickle and score, extending the inning, where Wisz later drilled a three-run homer. The Bruins finished with seven runs in the inning after scoring once in the first, and added on five in the third and one in the fourth.

Maggie Balint took the loss after allowing eight runs (four after the mental error) on six hits and three walks over 1 2/3 innings. Karina Faasisila relieved Balint (2-1) in the second and yielded four runs on five hits over 2/3 innings. Hannah Johnson came into the game in the third and gave up two runs on three hits in 1 2/3 innings, recording San Diego State’s only strikeout.

The Aztecs allowed a run in all four innings pitched today after entering the game with a run allowed in only two of the first 35 innings of the year.

San Diego State returns home to play host to No. 5/6 Washington on Friday (doubleheader starting at 4 p.m.) and Saturday (1 p.m.).