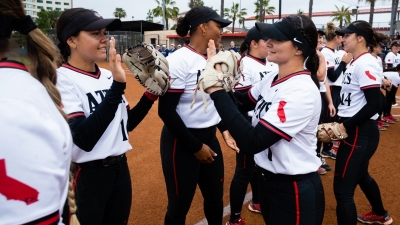 May 7, 2022 (San Diego) - San Diego State saw its seven-game winning streak snapped in a 3-1 loss to Utah State Saturday afternoon at SDSU Softball Stadium. Despite the loss, the Aztecs (34-13) remain in first place in the Mountain West standings at 17-3, two games ahead of Boise State (15-5) with four to play in the regular season.

SDSU had plenty of chances to score in the game but went 0-for-5 with runners on base. San Diego State also had two runners caught stealing (one at third base) and a player tagged out in between third and home plate.

The Aggies (26-25, 11-9 MW) scored all three of its runs in the top of the fourth inning, taking advantage of three hits, one Aztec error, two wild pitches and a passed ball. Zaia Castruita reached on a throwing error by SDSU third baseman Makena Brocki and later scored on a single by Makenzie Macfarlane. Emily Tidd then drove in Tyler Thornton with a sacrifice fly before a perfect bunt single by Sydnee Smith knocked in Ariel Lopez.

San Diego State threatened in the bottom of the fifth when Jillian Celis and Alexa Schultz each opened with back-to-back singles, and moved into scoring position on a Brocki sacrifice bunt. Pinch hitter Jessica Cordola reached on a fielder’s choice to third baseman Claudia Medina, who got Celis in a pickle as she was tagged out halfway between third and home. Bella Espinoza then grounded out to shortstop Lexi Orozco to get USU out of the jam.

The Aztecs finally got on the scoreboard in the sixth as Mac Barbara reached on a fielding error by Castruita at second and was replaced by Elianna Reyes. Taylor Adams followed with a single and each runner moved up a base on a Danielle Romanello groundout. AJ Murphy took the first pitch she saw into right field to score Reyes with the sacrifice fly as Adams advanced to third. Celis, however, grounded right back to Kapri Toone in the circle to keep the score at 3-1.

After Maggie Balint entered in the seventh and struck out two in a perfect inning of relief, SDSU tried to force extra innings in the bottom of the seventh. Brocki drew a one-out, four-pitch walk and was replaced by Audrey Kull. Kull, however, was thrown out at second on a pitch that landed in the dirt and Toone got Macey Keester to ground out to Medina at third to end the game.

Schultz reached twice with a single and a walk to lead the Aztecs, who were outhit, 6-4, in the game.

Dee Dee Hernandez took the loss for SDSU after allowing three unearned runs on six hits over 3 1/3 innings, while striking out three. The left-hander dropped to 8-4 on the season and 5-1 in MW play. Allie Light pitched a perfect 2 2/3 innings of relief before Balint struck out two in the seventh.

Today was just the fourth time this season that San Diego State failed to score more than one run in a game. The Aztecs are now 1-2 when scoring exactly one run in a game and have also been shut out once.

SDSU had scored first in the previous seven games - all San Diego State wins - prior to today. The Aztecs have won 33 consecutive games when scoring first (28-0 this year).

C Mac Barbara saw her 40-game streak of reaching base safely snapped today. Barbara was 0-for-3 on the day, reaching on an error in the sixth. Barbara has still reached base safely in 44 of SDSU’s 47 games this season.