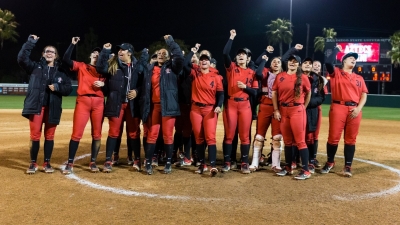 The Aztecs (9-3) spotted the Lions (5-6) a run in the top of the second inning on a two-out single, then scored the final eight runs of the game.

In the second inning, Alexa Schultz led off with a double to left-center field and Sadie Langlet followed with her first career home run down the left-field line. Kristen Parker later hit a two-run double in the inning to give SDSU a 4-1 lead.

San Diego State added to its lead in the fifth when Langlet’s single scored Taylor Adams.

In the seventh, Sara Lillie came through with a pinch-hit double that plated Kiera Wright from second base. Lillie later scored on a wild pitch before Katie Munoz’ groundout scored Makayla Jordan with the final run of the game.

Langlet, who entered the game with just one hit in 11 at-bats (.091 avg.), led the Aztec offense with two hits, a home run, a career-high three RBIs and a run. Schultz, meanwhile, added two hits, including a double, and a run. Shelby Thompson also reached base safely twice in the game with a walk and a hit by pitch.

The offense was plenty for the SDSU pitching staff of Marissa Moreno, Hannah Johnson and Maggie Balint. Moreno (3-0) earned the start and allowed one run on three hits and four walks over five innings, while striking out seven. Johnson gave up one hit in an inning of relief with one strikeout and Balint yielded one hit with two strikeouts in the final inning. San Diego State now has a 2.13 ERA on the season over 82 innings.

The Aztecs improved to 20-3 all-time against Loyola Marymount.

SDSU is outscoring the opposition, 29-7, over its five-game winning streak.