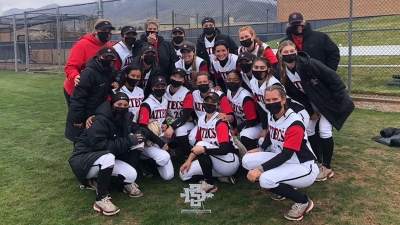 SDSU ended up overcoming two deficits in the game, tying it at 8-8 in the top of the sixth inning after trailing, 8-2, and then coming back from a 10-8 deficit to score five runs in the seventh.

Jessica Cordola got things going for San Diego State with a one-out, pinch-hit single in the seventh. After Nicole Siess replaced Cordola at first, Shelby Thompson drew a four-pitch walk. Jillian Celis then singled up the middle to score Siess. It appeared the Aztec comeback was going to come up just short when Kapri Toone struck out Alexa Schultz swinging, but Sadie Langlet came through with a pinch-hit, two-run double to give SDSU its first lead since the second inning (2-1). Danielle Romanello followed with a two-run homer to put San Diego State up, 13-10.

Marissa Moreno, who entered the game in the third inning, retired the Aggies (13-22, 3-12 MW) in order in the bottom of the seventh to seal the win for the Aztecs.

Thompson got SDSU on the scoreboard with a leadoff home run.

USU tied it in the bottom of the first when Zaia Castruita’s bunt single scored Stephanie Reed.

A Sara Lillie homer in the second gave San Diego State a 2-1 lead before Utah State scored seven runs in the second off six hits, highlighted by a grand slam by Castruita and a two-run homer by Gabriella Jimenez.

The Aztecs, however, clawed their way back with two runs apiece in the third, fifth and sixth innings. In the third, Schultz scored Celis on a single and Romanello later doubled in Makena Brocki.

In the fifth, a pair of singles by Taylor Adams and Riley Thies knocked in Schultz and Romanello, respectively.

SDSU finally tied it in the sixth as Brocki drew a bases-loaded walk to score Thompson and Romanello followed with a groundout to second base to plate Celis.

The Aggies took a 10-8 lead in the bottom of the sixth on back-to-back doubles by Castruita and Mazie McFarlane, and a sacrifice fly by Jimenez, but San Diego State responded with five runs in the seventh to take the series finale.

Celis had three hits, including two doubles, three runs and an RBI to lead SDSU, which outhit USU, 17-14. Romanello (HR, 2 R, 4 RBI, 2B), Thompson (HR, 3 R, RBI, BB, 2B), Lillie (HR, R, RBI) and Jeweliana Perez added two hits apiece, while Brocki and Schultz each reached base safely twice with a single and a walk.

Moreno (4-4) picked up the win in the circle after allowing two runs on six hits and a walk over five innings, while striking out two. Maggie Balint started the game and yielded eight runs on eight hits over two innings, striking out one.

2B Shelby Thompson had SDSU’s second leadoff home run of the season (also 1B Taylor Adams on March 18 at Nevada). San Diego State went all of 2018-20 without a leadoff homer.

The Aztecs won their 58th consecutive game when scoring at least 10 runs.

SDSU returns home to face New Mexico next weekend (May 1-2), including a doubleheader on Saturday (2 and 4:30 p.m.) and a single game at noon on Sunday.