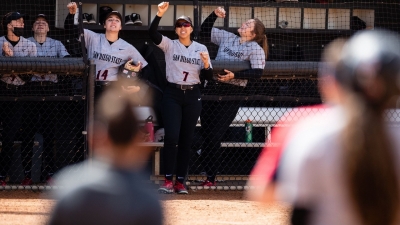 SDSU improves to 58-6 all-time against USD
Source:  goaztecs.com
Photo courtesy goaztecs.com
March 13, 2022 (San Diego) - San Diego State scored three runs in the top of the seventh inning to rally past San Diego 4-3 on the final day of the Torero Classic Sunday afternoon at USD Softball Complex. The Aztecs (16-10) improved to 58-6 all-time against the Toreros (11-16), including pair of victories this season.

SDSU broke a scoreless tie in the sixth when Bella Espinoza scored on a single by Alexa Schultz. San Diego State ended up loading the bases in the inning, but USD pitcher Courtney Rose got Danielle Romanello to ground out to first base to get out of the inning with just one run allowed.

San Diego answered in the bottom of the sixth, scoring three runs on just one hit and two Aztec errors. Joecellia Roberts tied it when she scored on a wild pitch. Savannah Alarcon and Clareese Santiago later scored on a pair of SDSU errors to take a 3-1 lead.

San Diego State then went to work in the seventh, quickly loading the bases on consecutive singles by Shaylan Whatman and Jessica Cordola, and an eight-pitch walk to Nicole Siess. Rose (4-6) got the first out when Jillian Celis grounded into a fielder’s choice where pinch runner Elianna Reyes was out at the plate. Rose also got Espinoza to ground out to second base but pinch runner Macey Keester scored on the play. With two outs, Mac Barbara doubled to left field to knock in Siess and Celis to make it a 4-3 Aztec advantage.

Maggie Balint came in to pitch the seventh and retired the Toreros in order to notch the save and secure the 4-3 SDSU win.

All nine starters for San Diego State reached base once in the game with six hits, two walks and a catcher’s interference.

Dee Dee Hernandez picked up the win after allowing one unearned run in an inning of relief, striking out one. Allie Light started the game and gave up three hits and a walk over three scoreless innings, while striking out four. Dani Martinez relieved Light in the fourth and scattered two runs (one earned) on three hits and a walk over two innings. Balint shut the door in the seventh for her first save of the season.

RHP Maggie Balint picked up her first save of the season, fifth at San Diego State and eighth of her career. Balint’s five saves with the Aztecs rank in a tie for eighth all-time.

San Diego State kicks off Mountain West play with a weekend home series against Colorado State at SDSU Softball Stadium. The Aztecs and the Rams will play a doubleheader Saturday, beginning at 2 p.m. and an 11 a.m. solo game on Sunday.