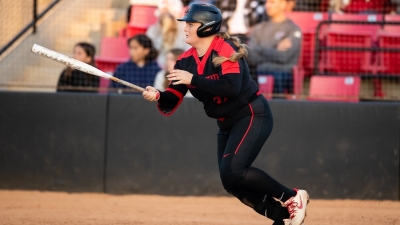 Aztecs trailed 7-0 and 8-1 before rallying for win

February 13, 2022 (San Diego) - Mac Barbara knocked in Jillian Celis with a two-out infield single in the bottom of the eighth inning to give San Diego State an improbable come-from-behind 9-8 victory over UIC Saturday night at the San Diego State Season Kickoff Saturday at SDSU Softball Stadium.

The Aztecs (3-1) trailed 7-0 and 8-1 in the contest before rallying for their second win over the Flames (1-3) in as many nights. SDSU scored at least one run in each of the final five innings and held UIC, which made the NCAA tournament a year ago, hitless over the final four innings.

San Diego State struggled defensively out of the gate, allowing seven runs in the bottom of the second inning on three errors and four hits, including a grand slam by Tara McElligott. None of the seven runs given up were earned on the Aztecs.

SDSU got on the scoreboard in the bottom of the fourth when Alexa Schultz led off with a double down the left-field line and later scored when Jeweliana Perez reached on an error by UIC second baseman Jojo Santiago.

McElligott answered with her second homer of the game to lead off the fifth inning, which would be the final hit of the game for the Flames.

Down, but not out, San Diego State responded in its half of the fifth as Nicole Siess hit a one-out, pinch-hit double down the left-field line and scored on a double off the left-field wall by Jillian Celis. Celis, who advanced to third on the throw home, then scored on an infield single by Isabella Espinoza. Barbara followed with a double to center field to plate Espinoza and halve the UIC lead at 8-4.

One batter after a four-pitch walk to Macey Keester in the sixth, pinch hitter Jessica Cordola drilled the first pitch she saw over the left-field fence to bring the Aztecs within two runs. It was Cordola’s first career home run.

SDSU got two more runners on base in the inning but was unable to come up with the game-tying hit.

The Aztecs kept up the pressure in the seventh when Barbara hit a pitch over the left-field wall for her second home run of the season to make it an 8-7 game. Shaylan Whatman (walk) and Makena Brocki (single) each reached later with two outs, and Siess followed with her second hit off the bench to score pinch-runner Audrey Kull to tie the game at 8-8. UIC relief pitcher Alyssa McIntosh, however, was able to get Celis to ground out to force extra innings.

With the international tiebreaker rule in effect, SDSU pitcher Dani Martinez retired the Flames in order in the top of the eighth to give San Diego State the chance for the walk-off RBI.

Celis was placed on second and advanced to third on a sacrifice bunt by Espinoza. It appeared UIC pitcher Christina Toniolo was going to get out of the jam when she got Schultz to pop out to second base and Barbara quickly faced a 1-2 count. After taking a ball, Barbara chopped a bouncer to McElligot at first base. Barbara raced down the line and beat the throw to a charging Santiago from second, knocking in Celis with the walk-off hit.

Barbara was 3-for-5 with a home run, double and three RBIs, while Celis (3-for-4) was a home run short of the cycle, reaching a fourth time with a hit by pitch, and scoring a pair of runs with an RBI. Siess reached in all three plate appearances off the bench, going 2-for-2 with a walk, RBI and run scored.

Martinez (1-0) picked up her first win with the Aztecs, allowing three runs on four hits and a walk over 6 1/3 innings of relief, while striking out three. Allie Light started the game and gave up five unearned runs on three hits and a walk, recording one strikeout.

Coupled with last night’s 9-1, five-inning run-rule win, San Diego State scored at least one run in 10 of its 13 innings against the Flames.

The Aztec bench (pinch hitters and pinch runners) combined to go 3-for-4 with three RBIs, four runs, three walks and a .857 on-base percentage in tonight’s game.

SDSU wraps up its play in the San Diego State Season Kickoff against Cal Poly at 2 p.m. on Sunday.

Other Saturday Games at the San Diego State Season Kickoff