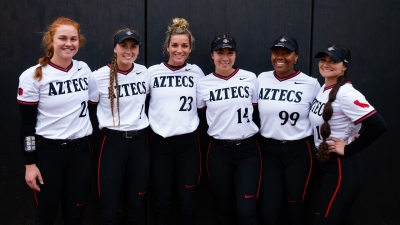 May 8, 2022 (San Diego) - Senior Nicole Siess hit a two-out RBI triple in the bottom of the seventh inning and then scored on a throwing error to give San Diego State a come-from-behind 4-3 victory over Utah State Sunday afternoon at SDSU Softball Stadium. The Aztecs (35-13, 18-3 MW) claimed their seventh consecutive series with the win.

SDSU leads Boise State (16-5) by two games in the conference standings and owns the tiebreaker after taking two of three against the Broncos in April. San Diego State needs one win next weekend in a series at New Mexico to clinch at least a share of the MW title and the league’s automatic bid to the 2022 NCAA tournament, regardless what BS does in its series at Colorado State. Two victories by the Aztecs will clinch an outright league championship.

Trailing, 3-1, after a two-out, two-run double by Mazie Macfarlane in the top of the seventh inning, SDSU looked to rally for its six seniors playing in its final home game, including Siess, Taylor Adams, Maggie Balint, Jessica Cordola, Danielle Romanello and Alexa Schultz. Schultz reached on a one-out throwing error by Aggie (26-26, 11-10 MW) third baseman Claudia Medina and got to second base to give San Diego State a chance. Cordola then took the first pitch she saw up the middle to plate Schultz and move to second on the throw. Elianna Reyes replaced Cordola at second and advanced to third on a Romanello groundout. Siess then came through with a triple off the right-center field wall, which easily scored Reyes. The cutoff throw from USU second baseman Zaia Castruita, however, sailed into the Aztec dugout and hit a bucket, allowing Siess to score the walk-off run.

Six different players had a hit for SDSU, which scored in the first when an Adams single knocked in Mac Barbara.

Utah State tied it in the sixth as Lexi Orozco reached on a two-out error and pinch runner Tyler Thornton scored on a Castruita double.

Balint got the start and allowed three runs (two earned) on four hits and no walks over 6 2/3 innings, while striking out 11. Balint, who no-hit the Aggies in a 4-0 shutout on Friday night, gave up her first hit of the weekend with two outs in the fourth, which went down as a bunt single. The right-hander had gone 11 2/3 innings of hitless ball prior to the bunt single. She finished the weekend 1-0 with a 0.95 ERA in 14 2/3 innings, striking out 25 without issuing a walk and holding USU to four hits and a .080 average.

Dee Dee Hernandez relieved Balint with two outs in the seventh and, after giving up the double to Castruita, got Gabriella Jimenez to pop up to shortstop AJ Murphy. Because of San Diego State’s heroics in the bottom of the seventh, Hernandez picked up the win to improve to 9-4 on the season.

RHP Maggie Balint recorded her 14th double-digit strikeout game in her 25th start of the season. She has at least 10 strikeouts in three consecutive starts.

The Aztecs have won 13 of their last 14 Senior Day games, only falling to Mountain West champion Fresno State on the 2021 Senior Day. SDSU’s last loss on Senior Day prior to last year was 2007.

San Diego State extended multiple streaks with the comeback victory. The Aztecs have now won 34 consecutive games when scoring first (29-0 this year), 23 straight when leading at any point in the game (33-3 this year) and 18 in a row when leading after five innings (24-3 this year).

SDSU travels to New Mexico for the final series of the season with games set for 6 p.m. MT/5 p.m. PT on Thursday and Friday and noon MT//11 a.m. PT on Saturday.