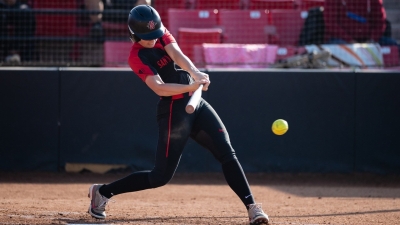 SDSU improves to 6-2 on the season

Nicole Siess homered and drove in three runs to pace the Aztec (6-2) offense, while pitchers Allie Light and Dee Dee Hernandez combined on a two-hit shutout.

SDSU jumped out to a 5-0 lead in the bottom of the second inning, highlighted by a two-run home run by Siess. It was her first of the season. Bella Espinoza also scored on a passed ball, Makena Brocki on an infield single by Jillian Celis and Mac Barbara on a throwing error by Black Knight (1-1) catcher Mikayla Klepfer. San Diego State ended up with six hits in the inning.

The Aztecs added to their advantage in the third when a Siess groundout plated Espinoza.

In the fourth, Celis and Jeweliana Perez each were hit by a pitch and moved up a base on a passed ball. Taylor Adams followed with a single through the left side to make it an 8-0 game.

Hernandez then tossed a perfect seventh with a strikeout to secure SDSU’s first shutout of the year.

Light (2-0) allowed two hits (both singles) and a walk over four scoreless innings, striking out five.

The Aztecs recorded their first shutout since beating New Mexico, 1-0, on May 2, 2021. The two hits allowed by SDSU tonight also were its fewest given up since the same UNM game.

SDSU continues its play in the 31st annual Campbell/Cartier Classic on Saturday with games against Army West Point (4:30 p.m.) and Southern Utah (7 p.m.).