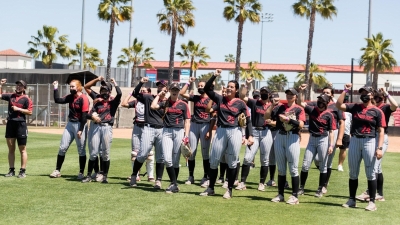 April 18, 2021 (San Diego) - San Diego State scored nine runs in the first inning and never looked back in a 14-3, five-inning victory over San José State Sunday afternoon at SDSU Softball Stadium. The Aztecs (20-12, 5-7 MW) claimed the series with the win.

A day after recording just 10 hits in a doubleheader split with the Spartans (5-18, 1-8 MW), SDSU had nine hits in the first inning alone and finished with a season-high 17 in the game. The Aztecs also set a single-game record with seven doubles.

After SJSU took a 1-0 lead on an RBI groundout by Jessica Giacoma in the top of the first, San Diego State went to work in the bottom of the first. Shelby Thompson and Jenna Holcomb each singled to lead off the game and got into scoring position with stolen bases. Jillian Celis followed with a bloop double to left field to score Thompson. Alexa Schultz then took the first pitch she saw into center field for a two-run double. San José State starting pitcher Caroline Bowman finally got an out, but Jeweliana Perez followed with a five-pitch walk. Sadie Langlet laced a single up the middle to score Schultz with the fourth run of the game. Makena Brocki then doubled to plate Perez. Nicole Siess followed with a bunt single to load the bases for Thompson, who cleared them with a double past Spartan left fielder Makayla Englestad’s glove. Thompson later scored on a sacrifice fly by Celis to account for the final run of the inning.

The Aztecs used small ball to score a run in the third. Brocki beat out an infield single, moved to second on a sacrifice bunt by Siess, to third on a wild pitch and scored on a sacrifice fly by Thompson.

SJSU scored twice in the fourth with a pair of RBI groundouts after loading the bases with no outs.

SDSU responded with four runs in the fourth, including a double by Alizae Umi to score Celis, a Perez single that plated Schultz and a two-run single by Langlet which knocked in Umi and Perez.

Maggie Balint, who replaced starting pitcher Marissa Moreno in the fourth, retired San José State in order in the fifth, including a strikeout looking to Jillian Figeroa to end the game.

The offense was plenty for Moreno (3-3) and Balint. Moreno started the game and allowed three runs on six hits and four walks over three innings, striking out three. Balint pitched the final two hitless innings of relief, yielding a walk, while striking out two.

The Aztecs’ 17 hits were their most in a game since recording 18 against UIC (Illinois-Chicago) on March 1, 2019 and were their fifth most ever in a Mountain West game.