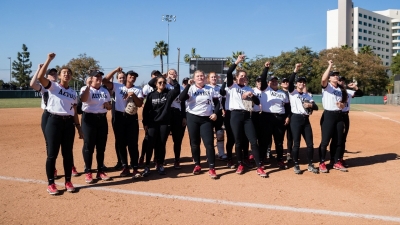 March 10, 2022 (San Diego) -  The San Diego State softball opened the Torero Classic with a 9-1 victory over Weber State Thursday night at USD Softball Complex. The Aztecs improved to 14-9 with the victory, while the Wildcats dropped to 17-5.

SDSU scored four runs in the bottom of the first, two in the fifth and three in the sixth to complete the run-rule win, while Maggie Balint and Allie Light combined on a one-hitter.

San Diego State scored four times in the first on just two hits. Jillian Celis was hit by a pitch to start the game, moved to second on a Bella Espinoza walk and scored on a Mac Barbara single. Jessica Cordola followed with a single to plate Espinoza before WSU recorded an out. Barbara scored on a Weber State error with Alexa Schultz at the plate before a sacrifice fly by AJ Murphy knocked in Cordola for the final run of the inning.

Weber State scored its lone run of the game in the top of the fifth when Aliya Harmon scored on a wild pitch.

The Aztecs responded in the fifth as Elianna Reyes scored on a wild pitch and a sacrifice fly by Schultz knocked in Shaylan Whatman.

After Light struck out Arissa Henderson in the sixth with a runner on third, SDSU ended the game with three runs in the bottom of the inning. Celis led off with a double, moved to third on a bunt single by Espinoza, who then stole second. Barbara then singled up the middle to score both runners. Nicole Siess replaced Barbara at second base (Barbara moved up on the throw home), got to third on passed ball and scored on a double by Schultz.

The nine runs on eight hits were plenty for Balint (7-3) and Light. Balint retired the first 11 batters she faced - seven via strikeout - before an error by her allowed Chloe Camarero to reach first base. Faith Hoe was then hit by a pitch before Balint struck out Henderson to get out of the small jam. She finished with eight strikeouts in four innings and now has 118 strikeouts in 69 innings on the season.

Light gave up one run on one hit - a leadoff single in the sixth - and four wild pitches in two innings of relief. The right-hander struck out five.

The Aztecs recorded their third one-hitter of the season (also Feb. 19 vs. Southern Utah and Feb. 20 vs. California Baptist).

SDSU picked up its sixth run-rule victory of the season, improving to 6-0 in run-rule games.

San Diego State won its 51st consecutive game when scoring at least nine runs in a game (5-0 this season).

The Aztecs continue their play in the Torero Classic with a Friday game against Weber State beginning at noon.