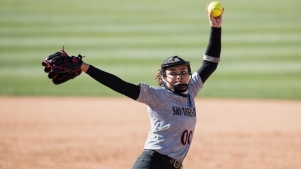 February 21, 2021 (San Diego) - The San Diego State softball team completed a series sweep over UC Davis with a 7-0 victory Sunday afternoon at SDSU Softball Stadium. The Aztecs improved to 5-0 with the win, matching their best start in program history (2005).

It was already the third shutout of the season for SDSU.

Marissa Moreno made her season debut in the circle, tossing three scoreless innings before giving way to Karina Faasisila for the combined shutout. Moreno allowed three hits and a walk, while striking out two. Faasisila (2-0), meanwhile, pitched the final four scoreless innings, yielding three hits and a walk, striking out three. Faasisila has not allowed a run this season in 10 innings of relief.

San Diego State got on the scoreboard in the bottom of the second inning, scoring four times off four hits and three Aggie (0-7) errors. Alexa Schultz got things going with a leadoff single, moving to second on a sacrifice bunt by Nicole Siess. Jillian Celis followed with a single, which allowed Schultz to score on an errant throw by UCD centerfielder Marissa Jauregui. Celis, who got all the way to third base on the throwing error, then scored on a sacrifice bunt by Alyssa Pinto. Danielle Romanello later blooped a single down the right-field line to plate Shelby Thompson. Jenna Holcomb also scored on the play when Megan Bower’s throw from right field sailed past catcher Katie Steffen-Brune.

In the third, Schultz made it 5-0 Aztecs with a solo home run well over the left-field fence, her second of the season.

In the fifth, Sara Lillie led off with a triple to right-center field and Jessica Cordola followed with another triple to left-center field. Schultz next reached on a fielding error by UC Davis first baseman Sarah Starks and, after the Aggies unsuccessfully tried to get Schultz out at second, Cordola raced home for the final run of the game.

Holcomb, Schultz and Thompson had two hits apiece for SDSU, which outhit UC  10-6 in the game.

San Diego State has allowed a run in only two of the 35 innings pitched this season.

The Aztecs improved to 9-2 all-time against the Aggies.

SDSU is 5-0 for the first time since 2005 and just for the second time in program history.