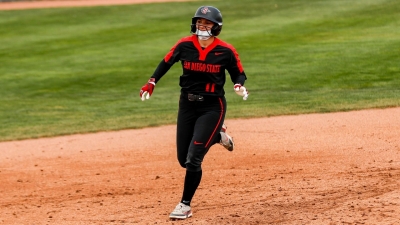 SDSU and the Aggies (13-21, 3-11 MW) combined for nine home runs over the two games with five coming by San Diego State, including three by Alexa Schultz.

In the opener, Schultz homered twice and Maggie Balint struck out a season-high 10 batters in a 6-3 Aztec victory.

After spotting USU a run in the bottom of the first inning, SDSU got on the scoreboard in the top of the third. Nicole Siess led off the inning with her second home run of the season, taking a 3-2 pitch over the left-center field fence. Schultz later hit a two-run homer well over the left field wall to make it 3-1 San Diego State.

The Aztecs tacked on a run in the fourth when Taylor Adams doubled down the left-field line and scored on a single by Jeweliana Perez.

Lexi Orozco got one back for Utah State with a solo home run in the bottom of the fourth.

Schultz hit a two-out home run to center field in the fifth and Eliana Reyes scored on a wild pitch in the sixth to cap the scoring for SDSU.

The Aggies scored one more run in the seventh on a groundout.

Balint (13-6) picked up the win after allowing three runs (two earned) on seven hits, three hit batters and a walk over seven innings, while striking out 10. It was her most strikeouts as an Aztec since recording 13 over nine innings against Wisconsin on Feb. 21, 2020.

SDSU seemed to pick up where it left off in the nightcap, jumping out to a 4-0 lead. Riley Thies scored Shelby Thompson with a single in the top of the first, Thompson and Sara Lillie knocked in Adams and Perez, respectively, in the second, and Schultz scored on a wild pitch in the third.

Utah State, however, came roaring back with the next 10 runs, including six in the bottom of the third and four in the fourth. Six of the 10 runs came off three Aggie home runs.

San Diego State rallied in the sixth when Lillie hit a two-run homer and Schultz hit a solo one but was unable to threaten the rest of the game in the 10-7 setback.

Marissa Moreno took the loss after allowing eight runs (six earned) on eight hits and four walks over a combined 4 1/3 innings, striking out one. Karina Faasisila gave up four runs on five hits in 2/3 innings, while Balint pitched a scoreless inning of relief with one walk allowed.

LB Alexa Schultz became the 11th SDSU player to record multiple home runs in a Mountain West game. With nine home runs this year, Schultz is tied with three others for the 10th most in San Diego State single-season history.

RHP Maggie Balint now has seven career games with double-digit strikeouts (five while at Oregon from 2017-18 and two with the Aztecs from 2020-21).